Here are a fun pair of photos I recently found online, at the Museum of the City of New York website. These are from a dinner given by Anna Fitzhugh, in honor of Montgomery and Stone, in 1904 at the Hotel Ansonia in New York.

Fitzhugh was a member of the chorus in The Wizard of Oz, and played a variety of small roles in the show - I posted several pictures of her here in this earlier posting. She left the company in 1904, so perhaps this dinner was given at the time of her exit from the show? The life size centerpiece of the Scarecrow and Tin Man is quite impressive! 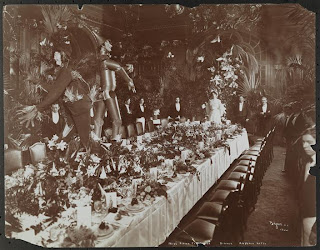 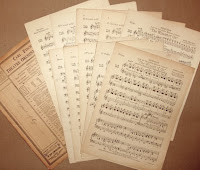 I'm sure this music would have pleased the listeners of Victor Columbia Edison - the living gramophone in The Patchwork Girl of Oz!
Posted by Bill Campbell 1 comment: 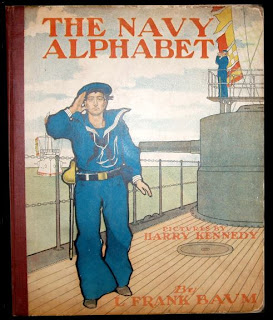 L. Frank Baum published The Army Alphabet and The Navy Alphabet in 1900, the same year as The Wonderful Wizard of Oz. These two books bear no resemblance to the Wizard, but might almost be seen as additions to Father Goose, His Book, as they contain the same sort of doggerel rhymes. I've had an Army Alphabet for some time, but I only recently obtained a Navy...

I've never felt as much interest in these titles, since they aren't actual stories, and let's face it - some of Baum's rhymes make you wince! But the pair of books do have a lovely series of illustrations by Harry Kennedy, reminiscent in some ways of Maxfield Parrish's black & white work. 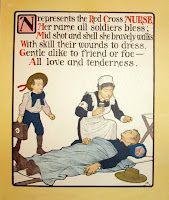 The Army illustrations are bold and a bit spare, generally set against a white background, which focuses the eye on figures. A nice element in the Army drawings is the inclusion of a small boy who appears in every illustration - a clever way to draw the reader into the book. 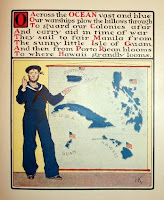 On the other hand, the Navy illustrations include more backgrounds and the verses tend to be longer, squeezed into a separate box at the top of the page. This division of the space makes the illustrations feel smaller, and perhaps a bit cramped. The boy is missing as well -  he does pop up once or twice in the Navy drawings, but the continuity is gone - a shame as it was a nice touch!

I'm not familiar with Kennedy's work aside from these two books. *After writing that, I took a look online and found that I do have another example - Kennedy illustrated The Airship Boys in the Great War, which was published by Reilly & Britton in 1915. Unfortunately, the 4 plates he provided for this title are very generic half-tone examples and really have none of the charm of the earlier alphabets. I'll have to keep an eye out for other examples of his work! 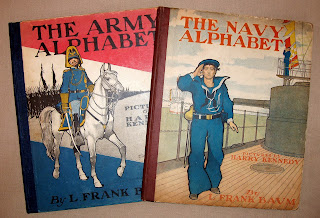 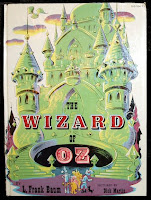 Previously I showed three of the 1961 Oz adaptations illustrated by Dick Martin. Since then, I've come up with a copy of the first title, The Wizard of Oz. This seems to be the scarcest of the series, and prices can vary wildly. So much of collecting seems to be waiting for the right copy at the right price at the right time!

I've never been a great fan of Martin's work, but he provides colorful and energetic illustrations for the story. It's humorous to note how his Dorothy seems to have fallen asleep in the poppies more elegantly than Denslow's version - but Denslow does conjure up a child who's dropped in her tracks! 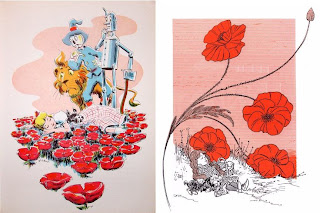 I particularly like the rear cover illustration showing the Scarecrow sitting and reading a first edition of the Wonderful Wizard, next to a stack of the new adaptations. The verbiage explains how these adaptations prepare a child for the full length versions of the books - but I think the Scarecrow has the right idea. Skip the adaptations and launch into the real book!
Posted by Bill Campbell No comments:

1897's A Valuable Life by Adeline Sergeant is one of W. W. Denslow's more pictorial efforts for Rand McNally. The front cover shows a woman gazing from a window, but when the book is viewed in its entirety, she seems to be watching a ship burning at sea, with a lifeboat of survivors in the foreground.

There is a copy of this book with an alternative front cover design, a bouquet of lilies, using the same spine and rear cover. I don't know if both covers were put into general publication or not - this is the only copy I've run across! 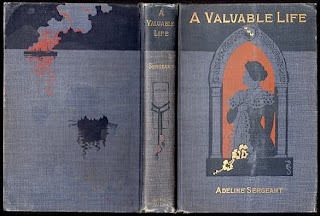