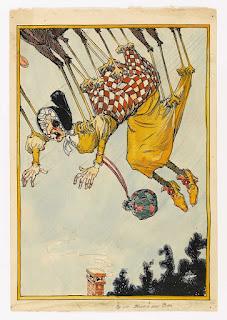 There was an auction today at Sotheby's in New York, and two of the lots were lovely pieces of original Oz artwork by John R. Neill. Sad to say, I didn't win either piece, but they are quite exciting to see!

Both are drawings used in L. Frank Baum's The Scarecrow of Oz, from 1915. These are the only known surviving pieces from Scarecrow, and until they turned up at auction I believe their existence was unknown. Both are color plate drawings which were watercolored after publication.

One drawing shows Blinkie the witch being carried away by a band of Orks. This is a fun image of the old crone, clearly taken by surprise as she flies over the chimney below. It's been very nicely watercolored, and closely matches the colors used in printing the plate in the book. 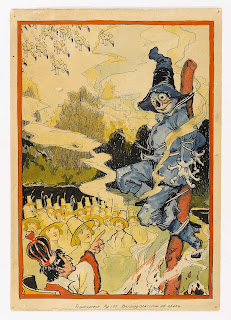 The other drawing was used as the book's frontispiece. In this, the Scarecrow is about to be burned at the stake, while a band of Orks is seen in the distance, flying in to save the day! This has also been colored nicely, but with some interesting differences from the printed plate.

The overall background tone seems to be more golden than the pink tone seen in the book. Also, the Scarecrow is a bit different - there are tones of pink and blue in his face, and his hat and boots are both in blue. In fact, he's colored to match Baum's original description of the Scarecrow.

In the book, the hat band and boot tops are red, while the hat itself is yellow. This is the standard coloring used on the Scarecrow since The Patchwork Girl of Oz. An interesting point is the hatband, which Neill shaded heavily with black ink in the drawing - this has been removed by the printer in order to add the brighter red. In fact, the Scarecrow has been brightened up all around!
Posted by Bill Campbell 2 comments: 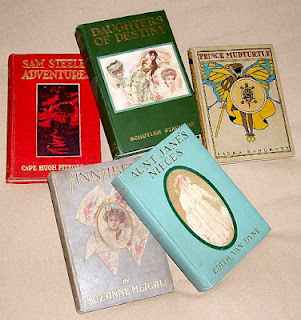 Aside from all this excitement, he and his wife also took an extended tour abroad - the first and only time Baum traveled overseas. That's quite a year!
Posted by Bill Campbell 5 comments: 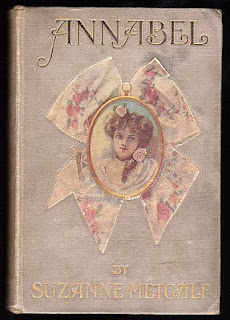 I filled one of the gaps in my collection of books by L. Frank Baum this week, by picking up a copy of the first edition of Annabel, from 1906. I've been keeping an eye out for this title for quite a while, and when this copy popped up on eBay at the don't-blink-now price of $13, I was thrilled to be able to add it to the bookcase!

Annabel was Baum's first pseudonymous novel for young adults, written under the name Suzanne Metcalf. I already had a copy of the 1912 second edition, which was issued with a new cover design, different interior art, and a new spelling of the author's first name (Susanne rather than Suzanne). I blogged about that copy a couple years ago.

One of the fun elements of the first edition is the cover label, which is die-cut in the shape of a bow. An interesting point that I hadn't realized, is that the paper stock used for this label is the same heavily textured paper used five years later on the cover label of The Sea Fairies. Annabel seems to have held up better than many copies I've seen of Sea Fairies, which tend to suffer from heavy rubbing of the cover label.
Posted by Bill Campbell 3 comments:
Newer Posts Older Posts Home
Subscribe to: Posts (Atom)