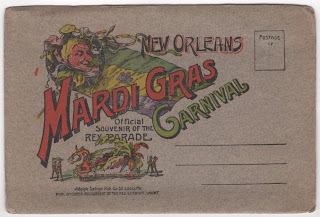 The tradition of formal Mardi Gras parades in New Orleans began in 1856, when a group of businessmen formed the first krewe, or secret society, The Mystick Crewe of Comus. Others followed, and in 1872, Rex was formed, another crewe with its own parades and floats. The Rex parade became a highlight of the Carnival season, due to the beauty of the floats created. 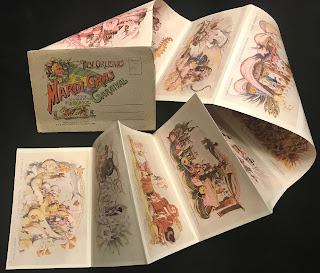 The theme of the 1907 Rex parade was Classics of Childhood. 20 floats were created, 18 pertaining to this theme as well as a title car and the Rex, King of the Carnival float. Souvenir postcards were made of the individual floats, as well as this folder showing the entire parade. I’ve been unable to find any identifiable photos of these floats, but I keep looking!
The 20 floats are pictured below, clicking on the image will enlarge it for easier viewing. 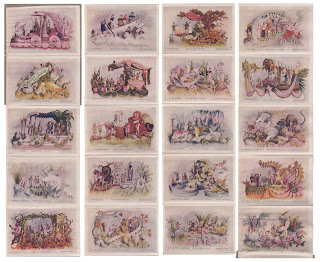 While a number of true classics were represented, some of the choices were decidedly more contemporary than others. Among the stories shown was The Wizard of Oz. 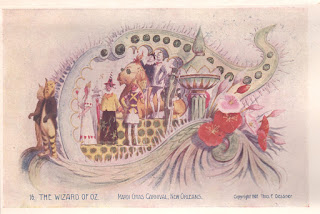 The float is firmly based on the original book and W. W. Denslow's illustrations, rather than the popular Broadway show of the period. Featured prominently in front are a pair of Kalidahs, the ferocious creatures with the heads of tigers on the bodies of bears. Behind them are Glinda and The Wicked Witch of the West, with a peek of the back of the Good Witch of the North between them. Next we have one of Glinda's soldiers, and then the Soldier with the Green Whiskers. Above these we see the Scarecrow, Tin Man and Lion. Dorothy seems to be missing, although she could be on the other side of the float! The float is decorated with large emeralds and the towers of the Emerald City, along with poppies from the Deadly Poppy Field. 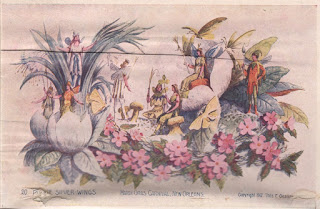 Another story with an L. Frank Baum connection was also shown. Prince Silverwings, written by Edith Ogden Harrison, was published in 1902 and the author worked with Baum on a scenario for a stage production of the story. Nothing came of that, but several of the characters and themes in later Baum books may well have been inspired by this story. The image of this float has some slight damage and creasing due to the original construction of the inexpensive album.
Posted by Bill Campbell