Here are some pet photos for Christmas — these are pictures of our rescue dogs Muzzy and Pepper. Don't forget your local animal shelters this holiday season, Muzzy and Pepper have lots of orphan animal friends looking for homes.

Muzzy and Pepper are waiting for Santa to arrive. (Incidentally, the stained glass Santa in the window is based on the title page illustration of L. Frank Baum's The Life and Adventures of Santa Claus.) 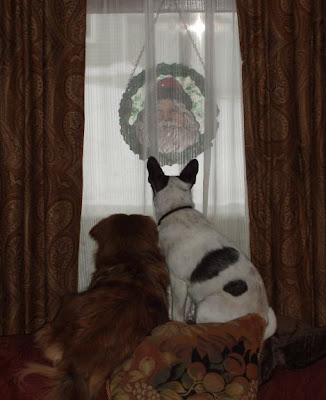 Muzzy goes to bed early so Santa will know she is a good dog and leave her lots of treats. 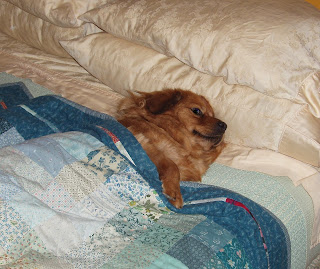 Pepper thinks if she smiles nice for Santa, she will get a new ball for Christmas. 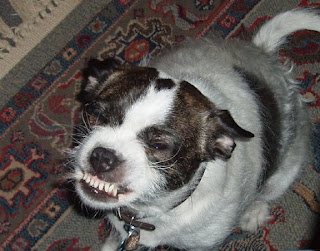 Pepper finds out that what she got from Santa was a gift certificate to have her teeth cleaned by the vet! Merry Christmas from Muzzy and Pepper!! 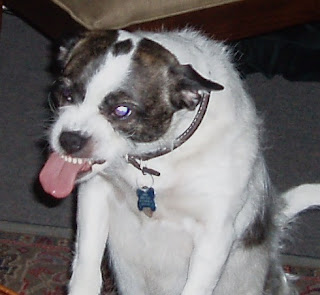 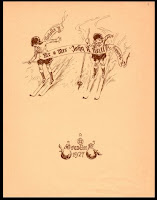 On the left is a John R. Neill family Christmas card from 1927, featuring daughters Natalie and Annrea on skis. This is printed on a standard size piece of buff colored paper, so it seems like more of a Christmas letter than card - but I'm not entirely sure how it was used!

Neill created original family Christmas cards for many years, and it must have been fun to be a recipient. Some of the cards involved hand coloring, others were just black & white. As always, a strong sense of whimsy is present, as can be seen in the present example.

This past weekend I picked up a little book titled 1000 Books for Children, published by A. C. McClurg. It was written by Penrhyn Coussens, and the fun part is that it was published in 1911. Consequently, many children's books considered classic had not yet been written, and many titles that are now obscure are listed.

L. Frank Baum is represented by Father Goose, and the Oz series. The Oz books are recommended for age 7 to 10, and each title has a small synopsis. The list ends with The Emerald City of Oz which is called out as the final Oz book - which of course it was at that time! 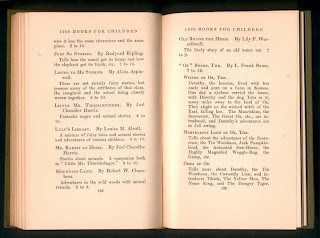 Peter Pan in Kensington Gardens is described as the best known juvenile of the time, and Anne of Green Gables is mentioned as the best of recent girl's books. It's a fascinating little book, and a real time capsule for children's book enthusiasts.
Posted by Bill Campbell 3 comments: 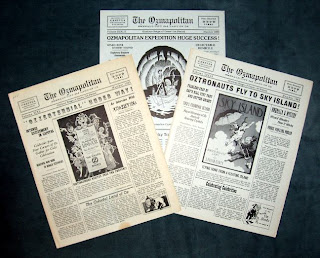 The Ozmapolitan was a clever publicity gimmick created in 1904 by Reilly & Britton to advertise the new Oz book, The Marvelous Land of Oz. This newspaper of the Emerald City was a giveaway item, with various articles relating to the new Oz title. Another issue was produced in 1905 to advertise The Wogglebug Book.

The idea doesn't seem to have been used again until the 1920s. The Ozmapolitan was revived to help advertise several of the Ruth Plumly Thompson Oz books of that time period. However, after a few years the paper disappeared once more. 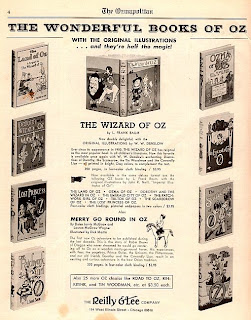 It had another revival in the 1960's, when Reilly & Lee published their final Oz title, Merry Go Round in Oz, and produced the new "white cover" editions of the Oz books. These books are so called because the cover designs were printed in color on sturdy white fabric bindings. Dick Martin redesigned original John R. Neill covers for these books, dropping the contemporary cover designs which were then in use. The back page of the Ozmapolitan shown on the left advertises the new editions, including the short lived version of The Wizard of Oz that used a W. W. Denslow poster design for the cover. The covers shown for Land of Oz and Ozma of Oz are also interesting, as they are not the actual "white cover" editions that were produced, but appear to be mock-ups of the books. It's worth noting that the new editions were 45 cents more expensive than the titles which were not redesigned!

I don't have any of the older issues of the paper, but I do have the 1965 and 1970 versions. I also have the 1986 version printed by the International Wizard of Oz Club to advertise the new Oz book by Dick Martin, The Ozmapolitan of Oz. I've always thought this idea was a lot of fun, and it's unfortunate that more issues were not created!

Hungry Tiger Press has the various papers available as free downloads on their website - http://www.hungrytigerpress.com/tigertreats/ozmapolitan.shtml
Posted by Bill Campbell 3 comments: 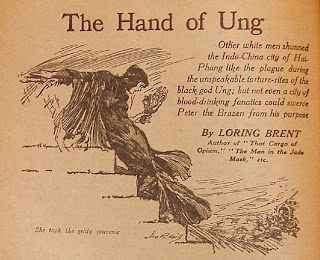 I have several issues of Argosy magazine from 1930, all of which feature John R. Neill ill- ustrations. Argosy was a ten-cent weekly pulp magazine which published a range of action stories - some of these were later published in book form, but without Neill's drawings. Neill illustrated stories in Argosy for several years, with drawings that range from the mundane to the supernatural.

A regular feature of the magazine at this time 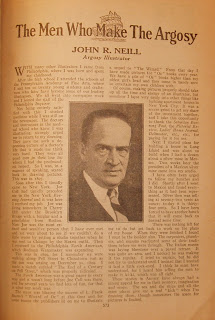 was an article called The Men Who Make the Argosy. In the issue for November 8th, 1930, Neill is featured in a short autobiographical sketch. This is an interesting article with various bits of information - one of my favorite tidbits is the mention of buying shares in a Mexican silver mine after dreaming of doing so - and then watching the price for silver drop! When I visited Neill's granddaughter a couple years ago, I saw several southwestern drawings that may well have been from this period. 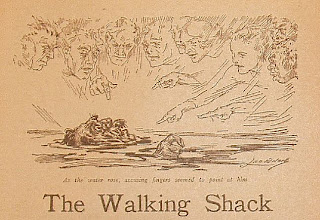 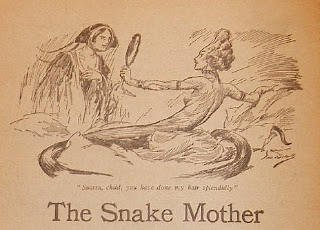