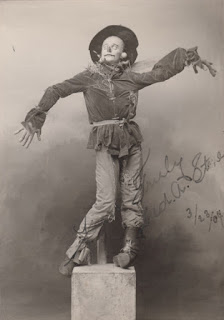 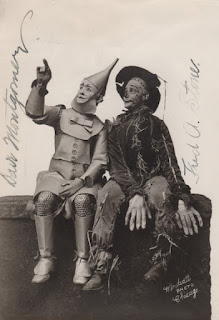 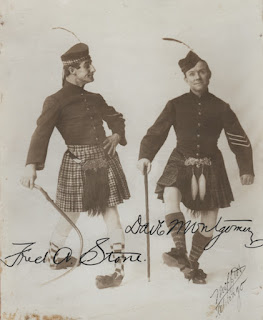 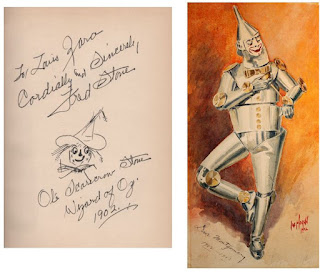 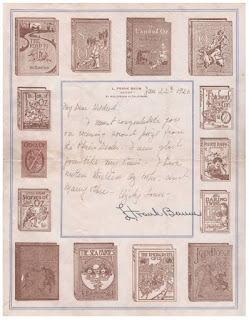 This was written in January of 1920, when there were still only thirteen titles in the series. Glinda of Oz would be published that summer, bringing Baum's total of full length Oz novels up to fourteen. 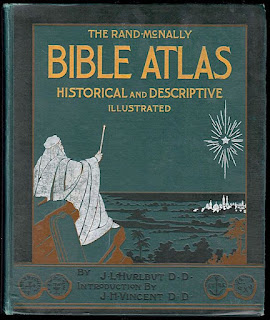 W. W. Denslow's covers for Rand McNally covered a broad range of subject matter. Novels, reminiscences, travelogues and even atlases were decorated with his work. Here we have a Bible Atlas, written by J. L. Hurlburt, with a cover that was first designed in 1897. This copy is from 1910, showing that this cover design was in use for at least 13 years. The book itself was first published in 1884, and remained in print into the 1950's (possibly later) with varying cover designs.

The cover is a dark teal fabric, stamped in black, burnt sienna, gold and silver. It's an elaborately produced book, with color printing and two large fold out pages. 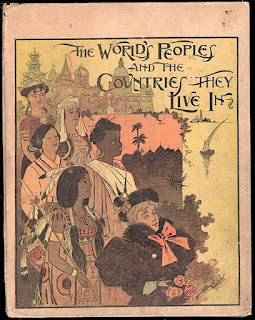 I've shown another example of a Denslow designed atlas in the past, The World's People and the Countries They Live In.  It also dates from 1897, but the cover style of this book is quite different. Rather than the simplified image used on the Bible Atlas, Denslow has produced a detailed drawing featuring women of various cutures. This book also included color printing.

These two examples provide an interesting contrast of the many styles in which Denslow worked. 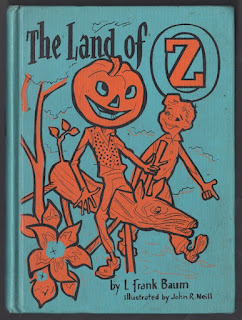 Library bindings are a specialty niche in the world of Oz collecting. The books were available from the 1940's to the 1960's in sturdy bindings intended to hold up to heavy use. The covers were usually brightly colored, simplified screenprints of the original cover labels. The spines generally featured the title, without the usual pictorial vignette. As expected, these books often show heavy wear from library use. However, the specialty binding was also available to general customers, so copies occasionally turn up that were never used in a library system. 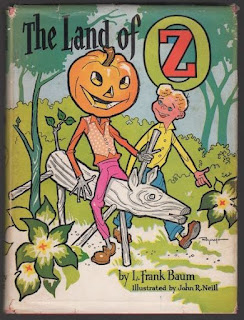 I haven't expanded into this area, but I did recently pick up an example that came my way. This is a library binding of The Land of Oz, featuring the Roland Roycraft dust jacket design, printed in black and orange on turquoise cloth, from 1959. The Roycraft designs were only issued for a short period of time as dust jackets, not as paper labels mounted to the book covers - so it's fun to have a copy with the design imprinted on the actual book! This particular copy bears no evidence of library use, so it presumably was sold to a home user. It's also interesting to note that the cover has been completely redrawn for this use!

John R. Neill was always a frugal artist. Many of his drawings have sketches on the back, generally for other illustrations he may have been working on at the time. When working on his elaborate illustrations for The Road to Oz in 1909, he made various preparatory sketches and, as was his habit, these sketches were often on the back of finished drawings.

They can vary from very rough, as in this sketch for the Shaggy Man catching the heads of the Scoodlers  - 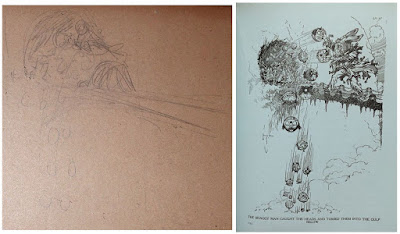 to more complete, like this drawing for Jack Pumpkinhead at home  - 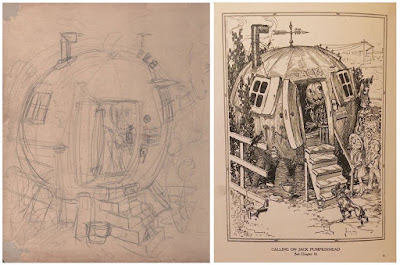 to variations on the final drawing, as in this version of the Shaggy Man in the Truth Pond - 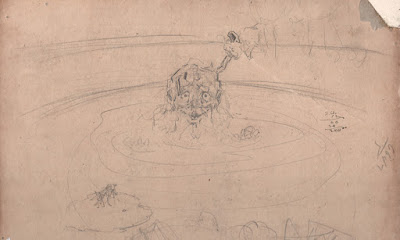 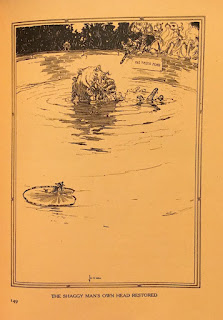 In the final version of this drawing, the character's head is in profile rather than full on. Remember that clicking on an image will enlarge it for better viewing. It's always fascinating to see how drawings develop!