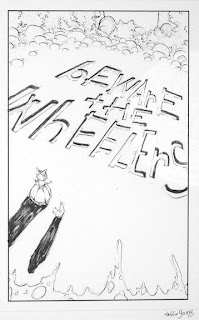 Here's another page by Skottie Young from the award winning Eric Shanower/Skottie Young adaptations of the Oz books, published by Marvel comics. This one comes from Ozma of Oz, and shows Dorothy finding an ominous warning scratched into the sand on an unfamiliar beach. And very good advice too!

Also, a pair from The Marvelous Land of Oz - here we see the companions captured by General Jinjur - and their escape in the flying Gump!

I obviously enjoy Skottie's artwork, and his take on the Oz characters and situations. I also think it's one of the better opportunities out there for acquiring published Oz illustrations! 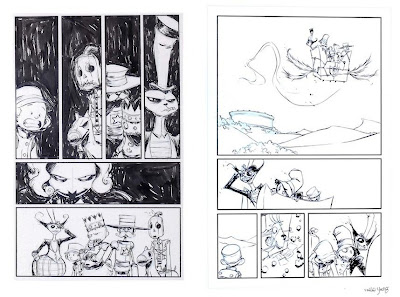 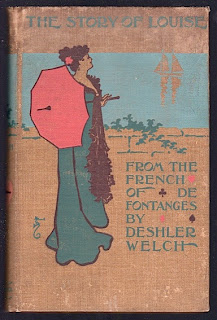 I haven't had a new W. W. Denslow cover design  to show in quite a while. This one is a little different - The Story of Louise, by De Fontages and translated by Deshler Welch. I don't think I've ever run across the name Deshler before!

Although it falls right into the style of the covers Denslow designed between 1896 and 1898 for Rand McNally, this was done in 1901 for a different publisher - the Royal Columbia Press. It's a lovely wraparound design, featuring a woman with a parasol viewing sailboats on a river. Denslow's seahorse is easily spotted by the hem of the woman's dress. On the rear cover, the woman is seen from afar, walking with a man toward a town in the distance. 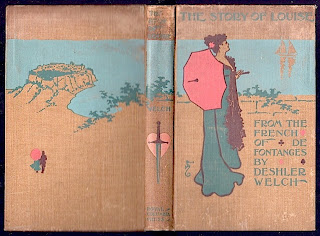 I think the color scheme of soft blues and pink on a tan ground is particularly nice!
Posted by Bill Campbell 1 comment: 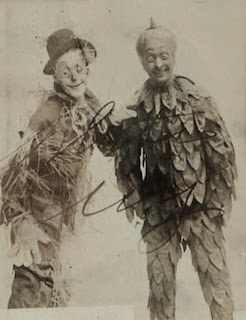 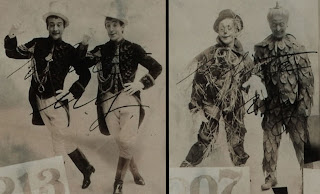 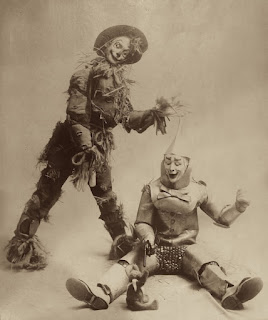 (Note - Since posting this, the actors in this photo have been re-identified! See this post for further details.)

After all the excitement surrounding the recent new Oz movie, here's a flashback to the first theatrical Oz adaptation - a wonderful and unusual photo of Fred Stone and David Montgomery as the Scarecrow and Tin Woodman in 1903. 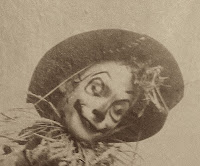 Fred Stone's makeup has always intrigued me. He drew his Scarecrow eyes on very deliberately, and his right eye always is drawn through the center of his real eye. The left eye, which is larger, encircles his real left eye. Both eyes have dots in the center, leading me to wonder - did he perform with his eyes mostly closed in order to create the effect of the Scarecrow eyes?

In the photo he is busy oiling the Tin Woodman through the character's funnel hat. I'm not certain how effective that would be on the character's joints, but it seems to have been a popular pose for the pair! I have not seen this particular photo before, and at a large 11" x 14", it makes a wonderful memento of the famous pair in their Broadway debut. 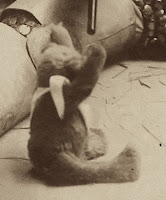 There is a third character in the photo who is quite a star in himself. For reasons unknown, the Tin Man is holding a Teddy Bear at gunpoint. The fascinating part of this is that this has to be one of the earliest Teddy Bears made. The famous hunting trip taken by Teddy Roosevelt, which gave rise to the creation of the stuffed toy, happened in November of 1902, and the first bears were offered by Morris Mitchtom of Brooklyn, New York in February, 1903.
The Steiff company of Germany also produced their first bears of this style in 1903. L. Frank Baum would eventually bring Teddy Bears to Oz in his 1917 book The Lost Princess of Oz, with the creation of Bear Center. 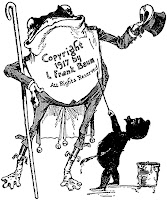 The Wizard of Oz opened in New York in January of 1903, so our stars were right on top of the trend! Perhaps they're reenacting their own version of Roosevelt's hunting trip!