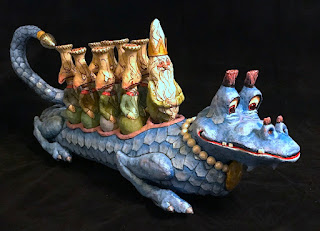 Some years ago Irwin and I visited with Kendra Daniels, a collector and dealer in children's illustration art, at her home. We viewed the amazing collections she and her husband Allan had assembled; and among the collections, I saw my first figurative skittle set.

Skittles is a form of ninepin bowling, for table top or floor. The sets Kendra collected were made in Europe in the 19th century, and consisted of whimsical collections of paper mache figures in wheeled wagons that relate to the characters. An antique example is shown on the right - in this case, a dog with puppies - from the LiveAuctioneers website.

As the summer drew to a close, I began to look about for a new Oz project and decided to give skittles a try. Most of my projects develop from ideas I've had for a very long time!

I decided that Quox, the dragon from Tik-Tok of Oz, would be a natural as a wagon, since he had seating for passengers attached to his back. For the skittles, I chose the Nome King together with an additional troupe of Nomes. The set needed a kingpin, and Ruggedo seemed like a natural choice!

Quox wears his pearl necklace and gold locket and, as in the book, there are eggs inside the locket to be used for knocking down the Nomes. Wheels are concealed under the dragon's legs, for rolling across the table or floor, and with the use of mini LEDs his tail lights up and his eyes flash. 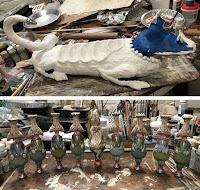 On the left, Quox can be seen at the start of his paint job. The Nomes are lined up and finished. All the pieces are molded from paper mache like the antique versions. Below, a video shows the set in action! 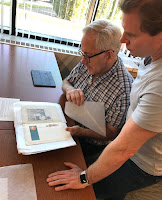 This past weekend Irwin and I visited the Kerlan Collection, at the University of Minnesota, to view the W. W. Denslow materials in their collection. We were accompanied by Brady Schwind, who was doing some research for his Arts of the Imagination Foundation. I’ve been to the Kerlan a number of times over the years, but it’s always fun to revisit and view interesting materials. 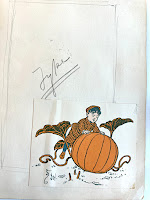 Among their Denslow holdings is the publisher’s dummy for The Pearl and the Pumpkin, written by Denslow and Paul West, and published by G. W. Dillingham in 1904. This is a fascinating piece, showing how the layout of the final book was developed. Proofs of illustrations are cut and pasted in place on blank pages, to figure out the spacing and typesetting of the final book. 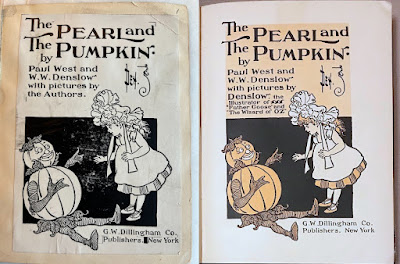 In the above image, the dummy title page is shown on the left, and a photo of the final title page is on the right. There's been a change to the credits; rather than "pictures by the Authors", the finished book credits Denslow alone, and stresses his past achievements. 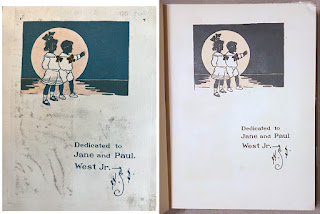 One of the unusual aspects of the dummy is the color scheme used on the illustration proofs. In the final book, the drawings are printed in black and orange. But for this working copy, the illustrations were printed in turquoise and orange. The big difference is that the proof illustrations appear to have three colors, since the areas where the two colors overlap show as a deep olive green. In the published version, the use of black ink instead of turquoise means that the overlapping areas simply look black. It’s a shame the trial colors weren’t used in the final book! 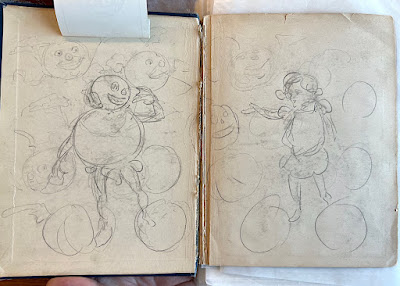 Another interesting point is the endpaper design. In the dummy, Denslow has sketched an illustration of Pearl and Joe, (the pumpkin), surrounded by jack o’lanterns. The published book shows secondary characters with Joe, and Pearl has disappeared! The sketch in the dummy feels considerably livelier to me. The endpapers of the first printing of the book were printed in turquoise, which almost seems to be a holdover from the original turquoise and orange color scheme; but later printings changed to the orange and black inks that are used in the rest of the illustrations. 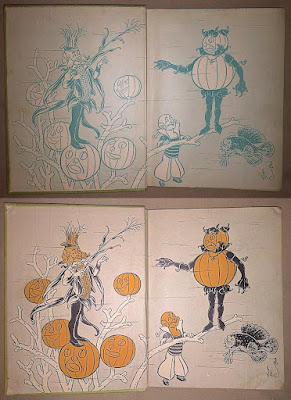 It was a very appropriate visit for Halloween weekend! 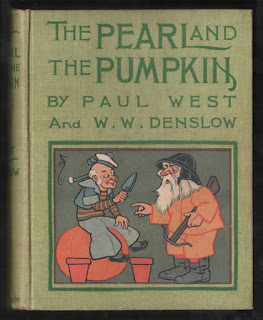