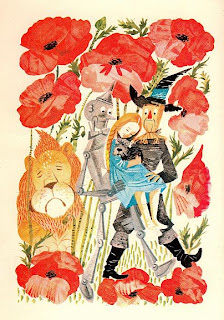 When I was a kid I belonged to the Junior Deluxe Edition book club. One of the titles I received through the club was this version of The Wizard of Oz, with illustrations by Leonard Weisgard. It's a pretty common book that turns up regularly on eBay, and I always liked it. The illustrations are simple black and white drawings, but there is a lovely color frontispiece of the main characters in the poppy field.

Weisgard was a prolific illustrator, as well as an author, working from the 1930s up to around 1989. He worked with a number of authors, particularly Margaret Wise Brown, and won a Caldecott medal in 1947. Since his death in 2000, his family has placed his archives with the Dodd Research Center at the University of Connecticut in Storrs. For more information on Weisgard, visit his family's webpage at leonardweisgard.com.

The colorful dust jacket used for both versions of the book is credited to Dick Umnitz, and manages to incorporate quite a few details from the story into one image. The stamped cover of the Junior Deluxe edition is by an uncredited artist, but they were clearly influenced by the original W. W. Denslow illustrations.
Posted by Bill Campbell 2 comments: A week or two ago I acquired two of the large prints (the Kalidahs and the Attack of the Fighting Trees) that were used in the local exhibition of Graham Rawle's artwork for The Wizard of Oz. This is the largest that these images have been printed so far, and they are a great deal of fun at this size (approximately 24" x 28") - the attention to detail is impressive, as the details are more easily seen! 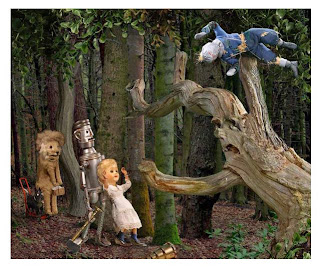 In the scene with the fighting tree, Dorothy is wearing her Emerald City dress, which is white since leaving the city. She has the whistle around her neck for summoning the field mice, as well as a bracelet on her wrist which was a gift from the Winkies for destroying the Wicked Witch. Toto and the Lion are both wearing gold collars, gifts from the Winkies, and the Tin Man's ax handle is now gold - another Winkie gift. His jeweled oil-can can't be seen, and neither can the Scarecrow's gold topped walking stick, but the golden cap is lying on the ground where it has fallen during the excitement. You can even see the pins and needles of the Scarecrow's new brains poking out of the top of his head!

I just think the kalidah image is a riot and a clever solution for showing bears with the heads of tigers. I laugh every time I see it. 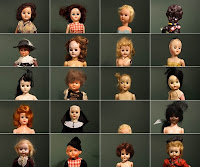 On Rawle's website, there is a fun blog entry from last April (here) showing his supposed screen tests for the doll to play Dorothy. The variety of hopefuls is pretty humorous! 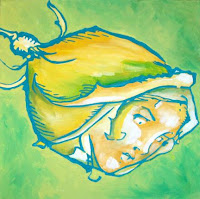 What would summer be without an Oz project to work on? Lately I've been having fun playing with a series of small (12" x 12") paintings based on characters drawn by John R. Neill. These are colorful, purely decorative and simply a lot of fun to do! 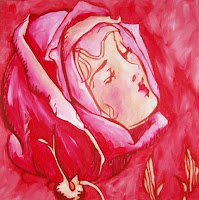 The three I'm showing are roses taken from an illustration in Tik-Tok of Oz. I utilized some of these same images back when I painted Neill characters on my dining room walls - they make a fun subject. It's another craft endeavor using an Oz theme - I do enjoy seeing what I can come up with! 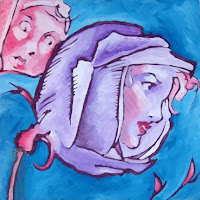 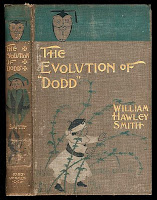 In 1897, Rand McNally published an edition of The Evolution of Dodd with a W. W. Denslow cover. This book is a rather moralizing chastisement on the state of public education of the time, particularly in rural areas. It's interesting to see how some problems (ratio of students to teacher, etc.) never seem to change! The copy I'm showing is worn, and bears traces of a library label on the spine, but with any luck I'll run across a better copy some day.

These Rand McNally titles can prove to be surprisingly elusive, and the variations that exist for some of the covers can add to the difficulties. In the case of this title, there is a later edition which uses Denslow's lettering on the cover and spine but no image. 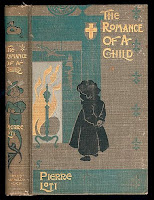 This title is very similar to another published in 1897, The Romance of a Child. I've shown that book before, but here it is again for the sake of comparison. The fabric and ink colors, as well as the layout of the spine are the same, and the imagery of the figures on the spine are very closely related. I can't help wondering if Denslow was working on both of these at the same time!
Posted by Bill Campbell 3 comments: 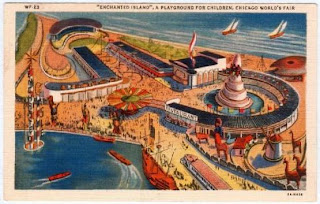 Since L. Frank Baum wrote The Wonderful Wizard of Oz in Chicago, and the Oz books were published there, it seems only appropriate that the 1933-34 Chicago World's Fair would make use of Oz characters in the children's area called The Enchanted Island. This was basically an amusement park, and among the attractions were over-sized statues of favorite children's book characters, including the Scarecrow and the Tin Woodman. 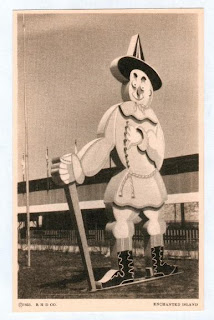 Here are a pair of postcards, the one above showing the entire park and the one on the left featuring the Scarecrow statue (or Strawman as he was called on the back of the card). In the lower left of the color card, the figures of the Tin Woodman and Scarecrow can be made out - both statues are in different poses than the finished structures. These statues were unique enough to be featured on a souvenir key sold at the fair - the Scarecrow can be seen standing on the left among the figures.

During the run of the fair, a puppet show written by Ruth Plumly Thompson and titled The Magical Land of Oz was performed by the Jean Gros marionettes - for more on Gros, see this blog entry: November 8, 2008. The Spring 1997 Baum Bugle contains an article about Oz at the fair by William Stillman, with additional images.