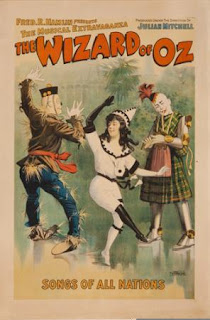 A poster from the original 1903 Broadway production of The Wizard of Oz was auctioned earlier this week at Poster Auctions International in New York, selling for $2800. I had a bid in - unfortunately the final price went quite a bit higher than I was prepared for. But what a fun piece of Oz ephemera for someone to have!
Posted by Bill Campbell No comments:

Back in September I posted a little preview for my next pair of Oz figures. They've been moving slowly, but I am finally making progress on Jack Pumpkinhead and the Sawhorse. Scraps and the Scarecrow are looking forward to some new companions! 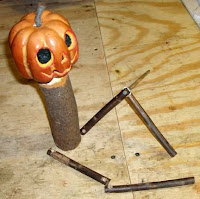 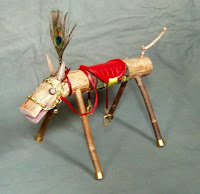 The Sawhorse is much further along. At this point I'm playing with various accessories and trims - in his illustrations, John R. Neill did enjoy throwing everything he could at this poor creature by way of tassels and ribbons, etc. I'll see what I can do!
Posted by Bill Campbell No comments: 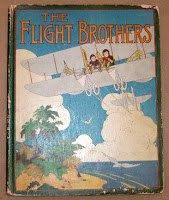 After the success of the Wright brothers in 1903, Reilly & Britton didn't waste much time jumping on the concept of the flying novel for teens. In The Wizard of Oz, the wizard leaves Oz by hot air balloon, but by 1909 boys, girls, everyone was flying airplanes! Even a 10 year old could do it, as seen in The Flight Brothers from 1912. 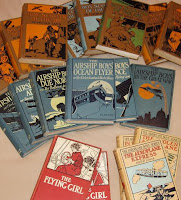 L. Frank Baum contributed to the trend with the two Flying Girl titles written under his Edith Van Dyne pseudonym. Other authors wrote the Airship Boys, the Aeroplane Boys, and the Boy Scouts of the Air series. The boys seem to have been more popular than the girls, as Baum's series only extended to 2 books while some of the other series continued to 8 or more titles. 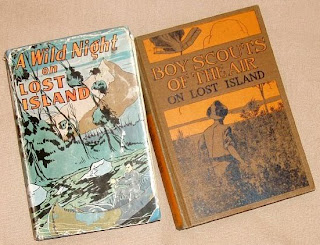 In the 1930's, Reilly & Lee resurrected some of these teen novels using new titles and packaging. I was recently given a copy of A Wild Night on Lost Island (quite a suggestive title), which is a repackaged Boy Scouts of the Air on Lost Island. The story remains the same, involving a canoe accident and adventures on a sinister island.

On the dustjacket flap several other titles are listed which seem to be similarly renamed books from 20 years earlier. On the Hungry Tiger Talk blog, one of these titles was featured - Jane Pellew in Kentucky, a reissue of The Camp Fire Girls in Old Kentucky. Unfortunately, none of Baum's work in this line was revived!
Posted by Bill Campbell No comments: 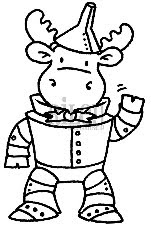 On my last entry I received a comment from a reader directing me to a project she and her son had completed - a version of The Wizard of Oz featuring Riley and Company, created in rubber stamping and scrapbook techniques.
It's impressive - you can take a look here - And the stamps can be found here!
Posted by Bill Campbell 1 comment:
Newer Posts Older Posts Home
Subscribe to: Posts (Atom)