Shifting Sands, by Frederic Burton, is another novel published by Rand McNally in 1898 with a cover design by W. W. Denslow. The title feels prophetic, as the Shifting Sands became the name of one of the deserts surrounding the Land of Oz. I doubt that there is any connection between the two, but it's always fun to run across a coincidence of this sort. Tradition has it that L. Frank Baum's final words were "Now we can cross the Shifting Sands".

This is another example of Denslow designing a wrap-around cover. The image carries across the spine to the back, where a small couple stands looking out to sea. Denslow's ubiquitous seahorse signature is at the lower right on the front cover.
Posted by Bill Campbell No comments: 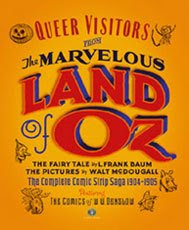 Sunday Press has produced an impressive volume of the Queer Visitors from the Land of Oz comic pages from 1904-1905. The pages are presented in full color at their original size, which really helps capture the vitality of the vintage pieces. I've always been amazed at the tiny size of the type used for L. Frank Baum's stories, but of course that left more room for the illustrations! These are some of the most ephemeral of Oz items, and it's great to have a sturdy version that will hold up to some handling - antique newsprint is delicate! The inclusion of additional material, like the full run of W. W. Denslow's Scarecrow and the Tinman comic page, is a welcome bonus. http://www.sundaypressbooks.com/index.htm 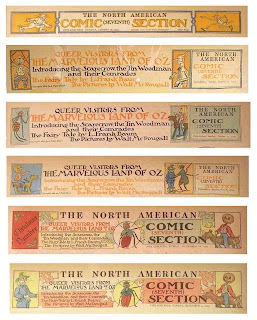 An interesting point on the original comic pages is the way they were presented by different newspapers. Decorative headers and additional borders were sometimes used, adding to the overall appeal of the pages. The Philadelphia North American was the originator of the page, and their presentation was quite simple, with the addition of an illustrated header. Apparently different papers did different things, resulting in different appearances. 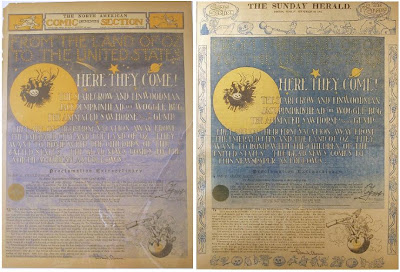 John R. Neill created many dazzling illustrations for the Oz series. He was also known for hiding faces in a number of his drawings, adding another level of fun to the books. I think one of his cleverest examples is in Dorothy and the Wizard in Oz, from 1908. 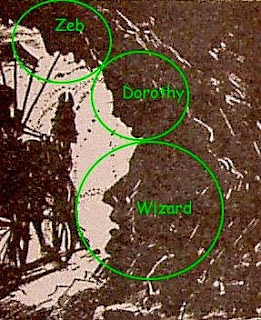 In the drawing used for the tailpiece of Chapter 7, (on page 94 in the first edition), we are shown the carriage carrying the travelers through the Black Pit of the Mangaboos. When looked at closely, the right side of the pit reveals silhouette profiles of Zeb, Dorothy and the Wizard, carved out of the rock! They can be a little more difficult to distinguish in some later printings. This is just another example of Ozzy details!
Posted by Bill Campbell 4 comments: 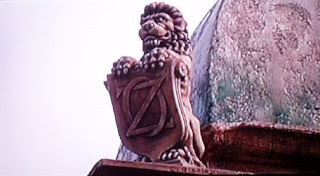 A couple months ago on eBay, several artifacts from the 1984 Disney production of Return to Oz were put up for auction. I didn't acquire any of the items, but I was very intrigued by a piece of the set that was offered. In the film, there are several close up shots in the ruined Emerald City. One of these shows a statue of a lion holding a scroll with the intertwined OZ logo. Apparently, there were two of these original lions which survived the film. One was auctioned - the second had met its demise some time earlier in a garden, where the weather took its toll. 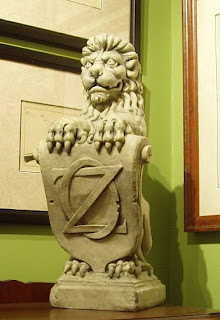 Seeing the interest stirred by this piece, the seller had the good sense to look into the possibility of having some additional lions made from the original. In the end, 10 lions were produced and I'm now the happy owner of one. The new pieces were cast in resin rather than concrete, and consequently were of lighter weight and a bit easier to deal with than the original. As this was being shipped from England, less weight was a help in holding down costs!
Posted by Bill Campbell No comments:
Newer Posts Older Posts Home
Subscribe to: Posts (Atom)