Last week's post showed costume designs by Caroline Siedle for the 1903 Wizard, from the collection of the Schubert Archive. I thought this week it might be interesting to show how some of the actual costumes measured up to the original concepts. The costume drawings are fascinating in their own right, and many have information on the back with names of actors or chorus members, notes concerning fabric choices, even details of construction. This was, of course, before the days of lightweight synthetic fabrics, and the costumes involved a good deal of silk, velvet, and spangles. As always, clicking on an image will enlarge it for better viewing.

These two designs for Anna Laughlin as Dorothy are both easily recognized with little to no adaptation. The cape and staff on her elaborate Emerald City costume are missing in the photo, but perhaps they were not in use.

Tryxie's first act waitress dress is also straightforward, although in this particular photo she's wearing a cape and no cap. Her Emerald City outfit takes a little more getting used to, as the various accessories of hat, gloves, muff and parasol are missing. But there's still at least one bird on her skirt!

Dashemoff is also easy to compare, although his boots have gone missing and some detailing of the tunic seems to have changed. On the rear of the sketch for the blue first act costume, there is a bold underlined notation of No Boot! It appears that the second act leggings were also discarded in favor of tights. There are some photos of Bessie Wynn in her first act costume with boots - shorter than those in the sketch. In the end, the chance to view legs and ankles seems to have won out!

The Munchkin maidens and youths are particularly faithful to the costume design.

Some chorus members from the third act - the Cooks, who are well realized from the costume drawing, and the Guards. The Guards maintain all the details of the design, though it looks a bit overwhelming on this 1903 chorus girl!

Finally, Cynthia Cynch in her third act costume. Here again, the outfit is immediately recognizable - but it looks as though the headdress of onions may have been discarded for flowers!
Posted by Bill Campbell 3 comments:

While in New York City this past weekend, I had the pleasure of visiting the Shubert Archive. The Archive is a large collection of theater-related material which is not open to the public, but is available for research purposes. A friend secured an appointment and we spent an enjoyable few hours learning about the Shuberts and the various aspects of the collection. The archivist Mark E. Swartz was our guide during the visit - Mr Swartz is also the author of Before the Rainbow, a study of productions of The Wizard of Oz prior to the 1939 film. This book was extremely useful to me when I worked on my toy theater!

My reason for visiting was to see what material was available concerning the 1903 Wizard of Oz. I was aware that the collection included some of Caroline Siedle's costume designs for the show, and I was pleasantly surprised to find a dozen examples - more than I expected! I've added two other examples I know of to show all the surviving costume designs that I'm aware of. These costume drawings are one of the few tangible things that survive from the creation of the show.

There are a number of other Siedle designs in the collection, including several which are unidentified. I think I helped to classify one of the unknown examples, which I've included in the above lineup - I believe this drawing is for the second act Emerald City outfit worn by Dashemoff Daily, played by Bessie Wynn. 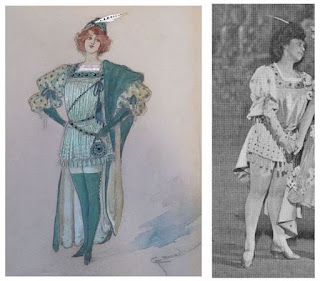