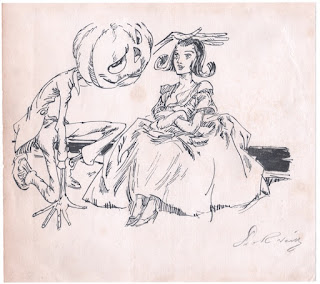 Just in time for Halloween - well, a day late - here’s a puzzling little picture. It appears to be an original John R. Neill illustration from the 1940 Oz book The Wonder City of Oz, showing Jack Pumpkinhead and Jenny Jump. This was offered at auction recently, but there’s a problem - the published version of this drawing has sold in the past and is currently being offered by Peter Harrington, a bookseller in the United Kingdom. So, what is this one?
When I saw this offered, I immediately had misgivings. I knew the published drawing was currently available elsewhere. The drawing itself didn't look "right". Looking at the other listings in this auction, my unease increased; every lot was being sold as “attributed to” or “in the manner of” various artists. Consequently, I had very little faith in the authenticity of anything being offered. This drawing had no provenance, and when I asked I was simply told it came from a private collection. But I was intrigued by it, and I bid on it!

I was the only bidder and won the auction for a fraction of the low estimate. Why would I buy a drawing that I felt was fake? I was fascinated by the idea of an actual Neill forgery, and of the work involved in creating it. I was very curious to see the drawing in person, to get a better sense of how close the artist came to succeeding.

This seems an odd image to copy; there are some questionable Oz drawings out there, but they tend to be “unused” images that haven’t been seen before. This drawing is one that’s known to exist. A strange choice to copy, except - there is a very clear image of the published artwork readily available online. It would be easy to use this as a template for creating a fake. Below, I've scaled the drawing and aligned the published version and this version together, to show how closely the basic drawing matches. 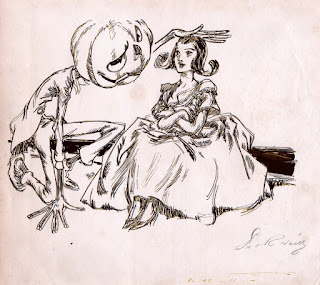 In examining the drawing, it’s surprising to see how closely many of the lines match up to the original version. Even fairly obscure things - on the right side, there is a fine line drawn under the heavy ink wash shading. This is not readily obvious, but it’s there in both drawings. That shows a good attention to detail; and yet, areas of shading are missing from Jenny’s left shoe, and on Jack’s sleeve. Not quite as attentive as I thought. The expression on Jenny’s face simply isn’t right; if I were trying to forge a drawing, I’d be particular about getting the face right! 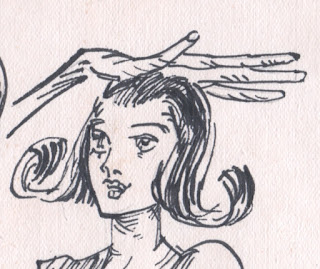 The line work is a mix of bold and fine lines, but it’s missing Neill’s touch. The lines are all of the same weight, while in Neill’s work there is a lively mix of both delicacy and strength, creating an elegant feeling of light and depth within the drawing. It was the lack of this quality, along with Neill's characteristic grace of line that initially made me doubt this drawing.

The paper is wrong as well. It’s drawn on a wove paper with a definite texture which I haven’t seen in other drawings from this book. The paper is nicely aged; and the drawing bears a very nice signature. This is in pencil, rather than ink, which is odd. And, with a little looking online, I found the original signature that this is based on - a detail of a drawing recently offered for sale. This in itself is interesting, as it shows that this is a rather recent forgery, within the past two years. The published version of the drawing is not signed.

Finally, the scale of the drawing is a little off. It’s slightly oversized compared to other drawings I have from this book. As far as the idea that this is a preliminary or rejected drawing, at this point in his life I should think Neill could dash off a drawing of this sort without much difficulty or concern!

So - the paper texture, the scale of the drawing, the signature, the quality of the line work and the general question of why this drawing would exist are all points against this piece. Overall, it’s a fascinating example of someone trying to be clever. By buying it I've removed it from the marketplace, and I like having it in my collection as a curiosity - but be warned, there could be other similar pieces turning up on the market!
Posted by Bill Campbell 2 comments:
Newer Posts Older Posts Home
Subscribe to: Posts (Atom)