A Surprise from Toyland!

So much of collecting is a result of chance or serendipity; the element of surprise is part of what appeals to me. And it invariably happens when least expected! 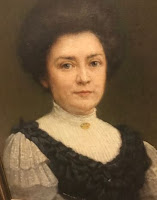 For some time now, I’ve been collecting costume sketches by Caroline Siedle. I’ve blogged about it before, and have gathered examples of her work for various theater productions, as seen above. Siedle was a major Broadway designer at the beginning of the 20th century, and one of the first women to be regularly credited for her contributions. A family portrait is shown on the left - note the artist's palette brooch at her neck!
My particular interest was sparked by her work on the 1903 Wizard of Oz, which was followed in the same year by Babes in Toyland. Both shows had massive collections of costumes - according to director Julien Mitchell, Siedle created 146 different costume designs for Toyland. Today, a small handful of the Oz designs survive in various collections, and I’ve only come across two definite examples from Toyland.

In one of those strokes of serendipity, I was recently contacted by someone in possession of half a dozen Siedle drawings. They had belonged to his father, who obtained them in the 1980’s at the closing of a lithography company in Pennsylvania. Imagine my surprise to find that they were all designs done for Babes in Toyland! They’ve now joined my collection. 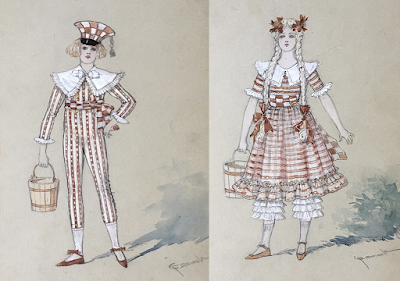 Here we have Alan and Jane, the two protagonists of the story, in their primary costumes. They were played by William Norris and Mabel Barrison, whose names are on the back of the drawings. Since so little color imagery survives from this show, it’s exciting to see the designer’s original color choices. I thought these striking striped costumes were intended to be black and white, and was surprised to find that they were actually russet and cream, with white trim!

Alan’s finished costume closely matches the drawing, whereas Jane’s dress changed from horizontal to vertical stripes on the skirt. By the time the show hit New York, Jane’s hair had also changed from braids to a softer style. The braids can still be seen in this photo from the original Chicago production.

Caroline Siedle was born in England, and attended the School of Art in South Kensington. She came from an artistic family, and became familiar with stage work after her marriage, doing decorative work and even scene painting (very unusual for a woman at that time). She began to work in costuming around 1893, with a show titled The Knickerbockers, and built a highly successful career. She could design a comic opera in three weeks, though she admitted "a month is better". 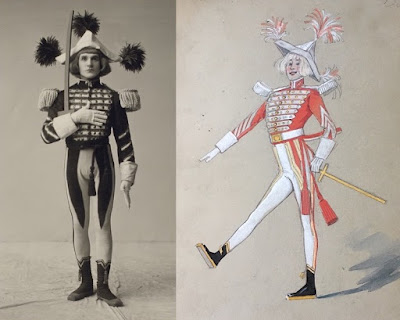 Alan’s toy soldier costume was completely redesigned for New York, but the Chicago production featured the design seen here. A notation on the back of the drawing says “shoes to be made by Mr. Siedle"; this would be Edward Siedle, Caroline's husband and the prop master at the Metropolitan Opera. The pair worked on many shows together.

A sideline for the couple was Siedle Studios, a warehouse filled with props that could be rented out to productions. Many of the pieces were purchased by Caroline at auctions and sales, and in 1905 ownership of the building was transferred to her name. Sadly, she died of pnuemonia in 1907, cutting short a brilliant career. While obituaries list her age as "around 40", she was actually 53 at the time. One obituary credited her with costume designs in nine shows that were currently running on Broadway - a very impressive list! Siedle Studios continued after her death, employing about a dozen people. 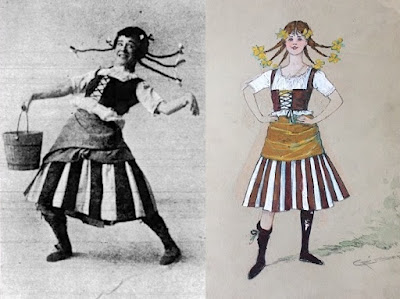 This is the primary costume for Jill, one of the 14 Piper children. Areas where the design was corrected by scraping the board can be seen, with changes to the position of the arm and the width of the skirt. The knockabout dance of Jill and Grumio, the toymaker’s assistant, was a humorous highlight of the second act of the show. The parts were played by Nellie Daly and Charles Guyer, a husband and wife team that specialized in acrobatic tumbling. 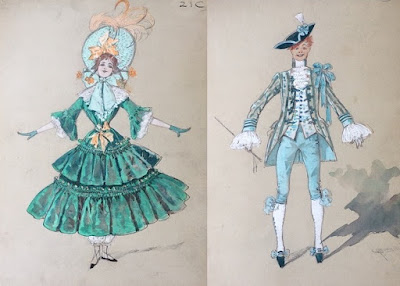 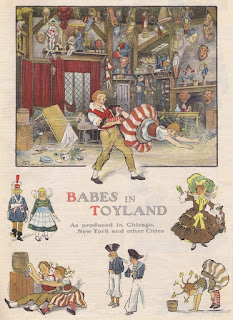 Finally, two third act designs for Jill and Grumio. At this point in the show, they are disguised as lady’s maid and valet to Alan and Contrary Mary, trying to escape from Toyland. A drawing of Jill in this costume can be seen in the ad on the right, which also features the pair of characters doing their eccentric dance. I have not run across any photos of the actors wearing these third act designs.

(Edit - Since writing this, I have found a newspaper photo of Jill in her Act 3 costume, shown on the left).

A lengthy newspaper interview with Mrs. Siedle was published in the New York Sun in 1895. It contains the following excerpt, written by the interviewer:
"Anyone who is hunting for a new collecting fad might take a hint here. When the designs are completed and sent to the purchaser, every one of them is a little water color gem of a figure, and so full of action that often they are preferred to portraits as foundations for the posters of a company. What becomes of all these sketches isn't stated, but if they could be secured they would make an immensely interesting collection."
I would have been thrilled to find a single chorus costume from Babes in Toyland. I never dreamed of six character pieces! 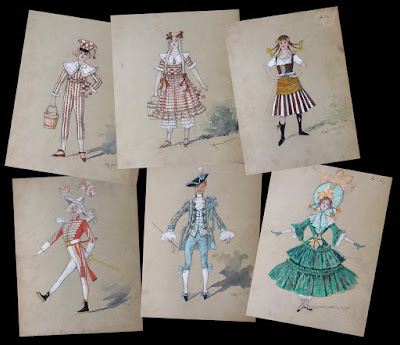