The Girl from Up There 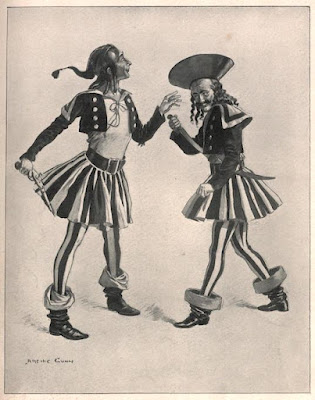 In 1903 the vaudeville team of Montgomery & Stone achieved Broadway stardom in The Wizard of Oz. But it wasn’t their first time on Broadway; in 1901, they were featured in The Girl from Up There, starring Edna May, book and lyrics by Hugh Morton and music by Gustave Kerker; one of the many musical comedies to grace Broadway during that time. 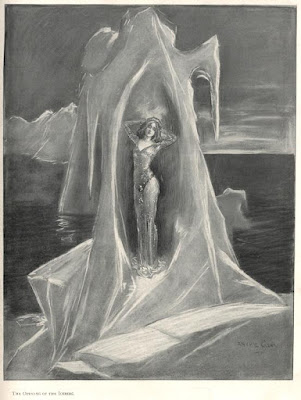 The story begins in Polaria, near the North Pole, where a young lady has been frozen in ice for 500 years. She is freed by an explorer with an "electric knife", but in order to stay alive she must drink from the golden cup of Odin within 90 days. The cup was last known to be in the possession of pirates. David Montgomery & Fred Stone made a hit as the pirates (Solomon Scarlet and Christopher Grunt) who befriend the heroine. 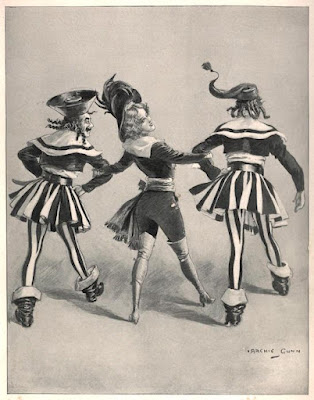 Prior to that time, the pair had built a solid reputation as blackface comedians in vaudeville. When Charles Frohman hired them for the new show, he insisted they should put blackface behind them, and perform in “straight makeup”. This proved to be a success, and after the run of The Girl From Up There, the duo switched to their new routine. They took the successful new act to London, prior to returning to the USA and stardom in The Wizard of Oz. 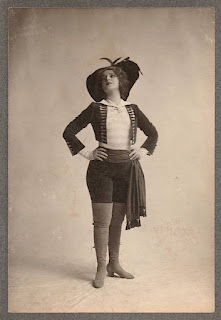 Edna May gained recognition in The Belle of New York, which ran moderately on Broadway before having a surprisingly successful run in London. While American critics were very much split concerning the talents of Miss May, she conquered London and was declared a star. She was then presented by Charles Frohman as star of his new show, originally announced as The Golden Cup. Perhaps he had some misgivings about her abilities, as he collected a very strong supporting cast to back up his new diva. As star, she collected the princely sum of $500 a week, a far cry from her $15 chorus days. In spite of this, the American critics weren't convinced by Edna in her new role, and a transfer of the show to London was not particularly successful; much was made of Edna appearing on stage in boys clothing for the first time, but even that novelty failed to save the show. However, Edna continued as a favorite of the British stage - as well as a popular subject for postcards! She married a millionaire in 1907 and retired from the theater. When her husband died in 1917, she inherited five million dollars. 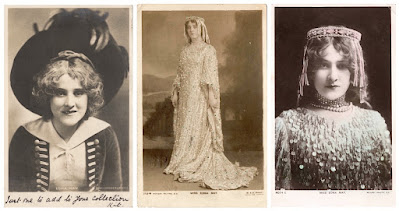 There are a number of minor L. Frank Baum/Oz connections with this show, aside from the presence of Montgomery & Stone. The drawings in this post are taken from the souvenir album of the production, which was published by R. H. Russell - publishers of Baum’s A New Wonderland. The drawings are by Archie Gunn, who would go on to design costumes for Baum’s show The Wogglebug. Julian Mitchell directed the piece, and the costumes of the show were designed by Caroline Siedle, both of whom performed the same jobs for The Wizard of Oz.
See the comments for a closer connection between Edna May and L. Frank Baum!
Posted by Bill Campbell 2 comments:

Over on LiveAuctioneers, our favorite forgers (Rhyton Galleries) have listed a new crop of fake John R. Neill drawings. But there has finally been a change! These pieces are listed as “John R. Neill (manner of)”, or “John R. Neill (in the style of)”. This is certainly a step in the right direction; past listings included the “manner of” information in the body of the description, but it was not stated outright in the listing title.

While I’d prefer the pieces not be listed at all, as they are blatant forgery attempts complete with signatures, at least they are now a little less misleading. There also seems to be a new player in the field - Zipriani Galleries, based in Lima, Peru(!). I can only assume this is another outpost of whoever is behind Rhyton, as the drawing offered appears to be done by the same hand on similar paper, and the other offerings from the gallery are dubious at best.

I first became aware of these drawings in 2020. I purchased the first piece I saw offered, in spite of knowing it to be false, as I thought it would be an interesting curiosity. Overall, there have now been 11 examples listed by the gallery. The various drawings can be seen below, starting with the current offerings. 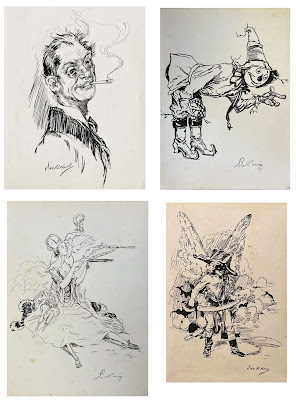 The drawing of the smoking man was previously offered but didn’t sell. Unfortunately, that one is still listed simply as “John R. Neill”. The others are new pieces; the Scarecrow drawing is taken from The Scarecrow of Oz, but the original drawing included other characters and was created for the cover of The Oz Toy Book. The drawing of women with pistols was offered by the Neill family several years ago, and the original of the third piece was used in The Bride, Her Wedding Book. This last piece is the one being offered out of Peru. As usual, these have all been given false signatures.

Here we have a drawing from Scarecrow of Oz, a magazine illustration for The Man Who Murdered a Fairy, and an unpublished piece. These drawings show more ambition on the part of the forger - they are considerably more elaborate than the earlier copies of drawings from Wonder City of Oz. 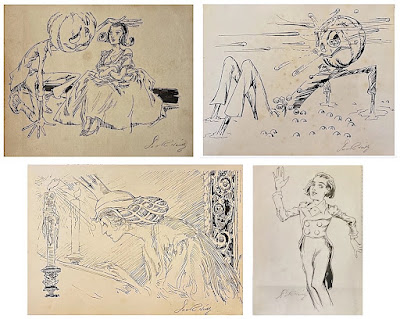 These were the first pieces to pop up - three drawings from Wonder City of Oz, and one from Tik-Tok of Oz. I’ve blogged several times in the past about this problem, as the drawings are good enough to fool an unsuspecting buyer - and they have! I’ll continue to keep an ongoing log of the pieces that turn up.
Be sure to exercise caution if you are considering purchasing a drawing by John R. Neill and have no knowledge of its background!