Oz at the Circus! 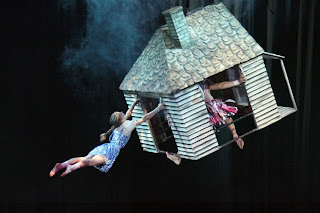 This past weekend I attended the Circus Juventas production of Oz. Circus Juventas is a circus training school, which teaches students up to the age of 21 in Cirque du Soleil-style performance techniques.


I’m not terribly interested in seeing another performance of The Movie on stage, but this showed promise of being something different - and it was! While following the basic outline of the film, there were a number of changes made - in part, to allow for the variety of circus acts being presented during the 3 hour performance. 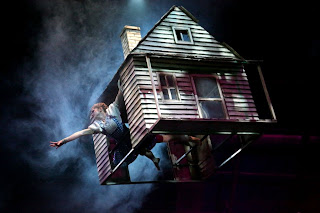 Oz was a good choice for a theme - plenty of opportunities for flying and tumbling and extravagant scenic effects! The tornado sequence was very memorable, with Dorothy literally hanging onto her house for dear life as it spun and rose through the air. 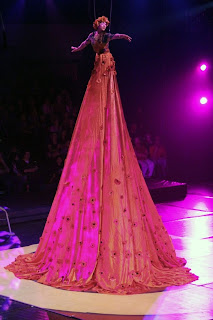 The Poppy Field was also lovely, with the Poppy Queen descending in a voluminous skirt that spread across the stage to form the field. Add to this a surprisingly flexible Glinda floating in a transparent contortionist's bubble, Winged Monkeys performing on flying trapezes, a fire juggling Scarecrow, a rolling Tin Woodman on a cyr wheel and many other excellent varities of circus acts and you have an evening to remember! 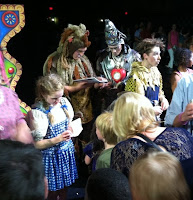 After the show the young performers met with the audience and signed autographs for young fans - many not much younger than the performers themselves! 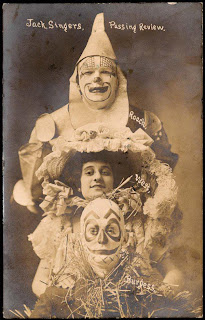 A while back I mentioned Jack Singer's The Passing Review, a theatrical turn that traveled the country and included impersonations of Montgomery & Stone in The Wizard of Oz. Here's a postcard image, found online, as well as an ad for the troupe from the Greenville Kentucky Record, Dec 16th 1909. The ad lists several popular performers who will be impersonated, including Montgomery & Stone, and even impressario Oscar Hammerstein! 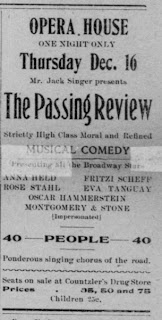 "The comedians are Bobby Burgess, who for several years has played the Scarecrow, Arthur Roach as the Tinman, Montgomery and Stone's greatest success, are peers in their take off of New York's greatest laugh-makers."

Not the best grammer, but the point is made. Anna Laughlin (Dorothy) was impersonated by "...Miss Clara West who is shown at her best in her impersonations of Anna Held.."

The production is billed as "Strictly High Class Moral and Refined Musical Comedy". I'm not quite sure what to make of the final line of the ad - "Ponderous singing chorus of the road." (!)
Posted by Bill Campbell 2 comments:

Recently I've been adding some later reprints of Oz titles to my collection. These are copies from the 1950s and '60s that were produced by the publishers Reilly & Lee with new cover designs, in hopes of appealing to a new generation of Oz readers.

The three that I'm showing here have covers designed by Roland Roycraft, in a very slapdash cartoon style. They're bright and colorful, and would certainly catch the eye on display in a bookshop. I find them amusing, as the covers have nothing to do with the style of the interior artwork!

Mr Roycraft was an artist with a variety of talents. He spent his later years living in Michigan, teaching watercolor techniques, as well as creating instructional videos and a book. Examples of his work can be seen here on his website. His watercolor work is quite different from this early commercial Oz work!
Posted by Bill Campbell 4 comments:
Newer Posts Older Posts Home
Subscribe to: Posts (Atom)