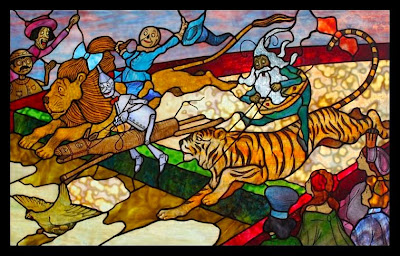 It's a good thing Billina isn't a turkey!
Posted by Bill Campbell 3 comments:

Here's a quick post to show progress on the Oz window. On the right, I'm working on painting details on various pieces before firing them in a kiln. With any luck, the window will be done this week! 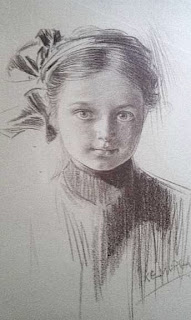 I was recently contacted by Ike Morgan's great nephew, who is working on gathering information on his great uncle. Unfortunately, I didn't have much to add to his knowledge - but he kindly allowed me to post this image of a lovely portrait in his possession (on the left) of Ike Morgan's sister - his grandmother.

In looking about, there doesn't seem to be much information readily available about Morgan. My posting from earlier this year has a few tidbits (click here).  He started as a newspaper artist - just like W.W. Denslow and John R. Neill. Unfortunately, newspaper art is very ephemeral and tends to be forgotten over the years, making it more difficult to investigate. 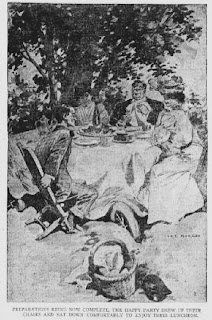 I did find that he illustrated a couple short stories published in 1907 in the Los Angeles Herald - the image on the right is from one, titled Mr Blink's Automobile. Two of these can be found online at Chronicling America, a site featuring scans of newspapers from 1826 - 1922.

Morgan illustrated a number of books - for L. Frank Baum, he contributed illustrations to American Fairy Tales, as well as illustrating The Wogglebug Book. He illustrated the Kids of Many Colors series for Grace Duffie Boylan, which received quite a bit of favorable coverage. A number of reviews for the book can be found in the newspaper archives mentioned above. 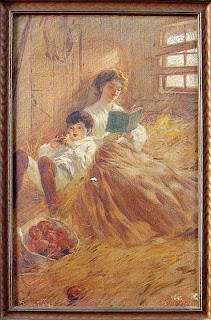 One piece I ran across is the painting on the left, which was sold by Buchard Galleries in 2004. It's a charming image and makes me wonder if Morgan did many paintings. 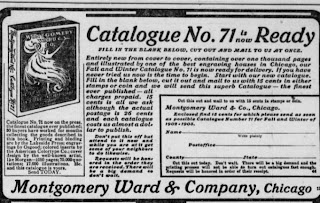 And, he designed the cover for the 1902 Montgomery Ward catalog. Advertising for this specifically calls out Morgan as a well known artist!

Back in August, I mentioned that we would be making another Oz-themed stained glass window for a local client. It's been underway, and here are a couple shots of the progress. 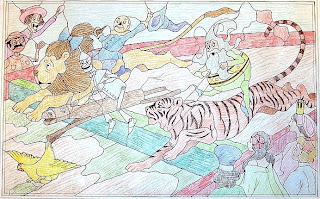 This window is based on the endpapers drawn by John R. Neill for Ozma of Oz, L. Frank Baum's third Oz title. We made some minor adjustments to the image, but it's a pretty straight-forward adaptation of the original illustration. Above, you can see the pattern, or cartoon, for the window.

On the left, pieces are being cut and fit to create the window. Below, all the glass has been cut and fit, and painting on the characters is beginning. 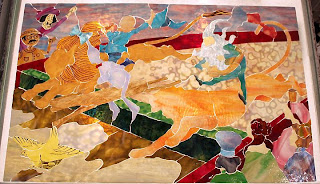 It won't be long before the window is ready for assembly!
Posted by Bill Campbell 1 comment:
Newer Posts Older Posts Home
Subscribe to: Posts (Atom)