I've just finished reading a copy of The Tapestry Room, written by the British author Mrs. Molesworth in 1879, and ran across an interesting passage. The child protagonists are traveling down a river in an enchanted land, and they come to a narrow passage that they are unable to get through. After whistling 3 times, an army of frogs appears, each with a length of thread that they tie to the boat and then use to pull the boat through the passage.

I couldn't help comparing this to the rescue of the Cowardly Lion by the field mice in the poppy field, in The Wondeful Wizard of Oz - in fact, with apologies to W. W. Denslow, I conjured up an image showing this as an alternative rescue force! 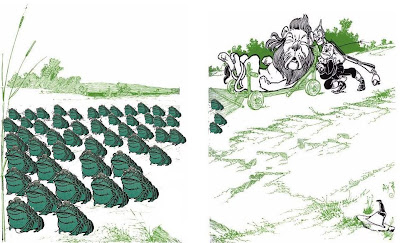 Back over Christmas, I read A. S. Byatt's most recent novel, called The Children's Book. There was an interesting, if fleeting, reference to The Wizard of Oz in this story. The overall book is a sprawling story, difficult to summarize - but the point I'm referring to occurs in 1904. One of the main characters is a prominent British children's author, who is writing a play for a summer arts camp. In discussions with a German puppeteer, we have the following:

"There is something in my mind. A search for a real house in a magic world. A search for a magic house in a real world. Two worlds, inside each other."
"The Wizard of Oz," said Steyning.
"Humphry says that is an allegory about Bimetallism and the Gold Standard, with its road of gold ingots and its silver shoes."
"It has a little wizard in a huge machine," said Stern. "Which is good for marionettes or other puppets."

In the end, the play does include three adversaries - a strawman, a metal man and a beast.

I found all this interesting because the British edition of The Wizard of Oz wasn't published until 1906 - 2 years after this conversation is supposed to take place. It struck me as odd that the story would apparently be so well known among a handful of characters of various nationalities - and then of course, the theory of political allegory is thrown in for good measure. It felt out of place in the general story, but it does show how Oz can pop up anywhere - even the most unlikely places!
Posted by Bill Campbell 2 comments: 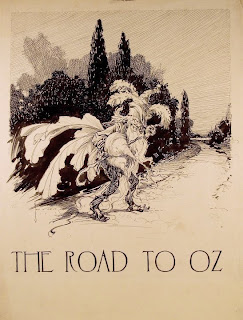 I've mentioned in the past that one of the things I'd love to have is a piece of original John R. Neill artwork from The Road to Oz. This title contains some of Neill's most fanciful drawings - though I do think many of the drawings in Dorothy and the Wizard and Emerald City are equally ornate. Since there were no color plates in The Road to Oz, Neill had an excellent opportunity to show his skill with full page pen & ink illustrations. 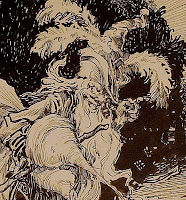 Surprisingly, the opportunity arose recently and I now have the original art for the half-title page from this book. It features one of Neill's elfish little men, possibly a Crooked Knook, this one clutching some root vegetables and pointing the way, with the book title beneath the image. It's certainly not the most elaborate of the Road drawings, but I do like that it seems to tell it's own little story! 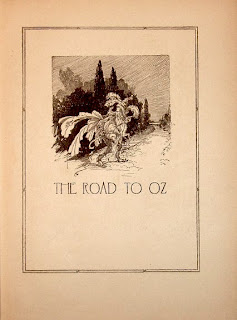 In the book, the picture was printed with the same border that was used on many of the full page illustrations. There is no border to this drawing, but there is a note in the left bottom corner instructing the printer to add the border. I always enjoy running across production details like that.
Posted by Bill Campbell 5 comments: 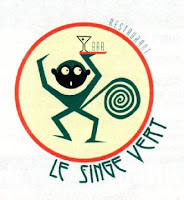 As an Ozzy coincidence, one day for lunch I ended up at a small restaurant called Le Singe Vert - or The Green Monkey - very appropriate as a Tin Woodman of Oz reference!
Posted by Bill Campbell 4 comments: 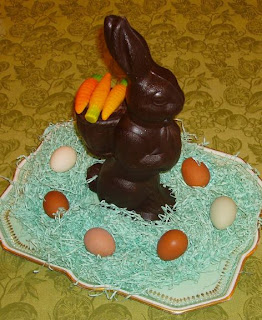 In honor of Easter, I'm showing a well aged chocolate bunny who has been living in my freezer for nearly 25 years. It was never intended that he should last this long, but sometimes these things happen!

I bought him in Rochester NY, where a sister of mine was living at the time, but for some reason he didn't get eaten that first year. After that, it became a matter of curiosity to see how long he might last, and he has lived up to the challenge beyond any expectations - even surviving a fall off a table, and a mild dog attack. Of course one of these years he might not make it back to the freezer.

The Easter Bunny does make an appearance in the last of the Oz books published by Reilly & Lee, in 1963. In Merry Go Round in Oz, Dorothy and the Cowardly Lion visit the Easter Bunny and his workshop during preparations for an Easter party in the Emerald City. It's a shame John R. Neill didn't get to illustrate this episode, as he had such a way with rabbits! Still, Dick Martin came up with appropriately festive bunnies. Incidentally, there's quite a resemblance between Martin's endpaper design for Merry Go Round, and Neill's design for The Yellow Knight of Oz!