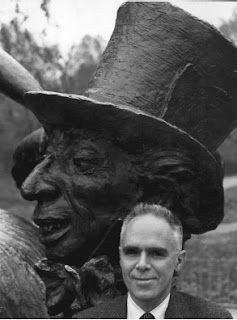 Noted author and scholar Martin Gardner passed away this past week at the age of 95. I first came across him when I was about 10 years old, as the author of The Annotated Alice (which was originally published in 1960 - the year I was born). I later learned of his Oz scholarship, including the fact that he was a founding member of The International Wizard of Oz Club, as well as the author of a variety of articles and essays on Oz topics.

In 1955 he wrote a two-part article on L. Frank Baum, published in The Magazine of Fantasy and Science Fiction, which helped bring national attention to Oz at a time when the books were being banned in many libraries across the country. He worked with Russell B. Nye to produce the first book length academic study of Oz, The Wizard of Oz and Who He Was. He even published his own Oz book, Visitors From Oz, in 1998.

Michael Hearn sent me this tribute, which was written for the Scientific American website. I'm posting it here with his permission:


Martin Gardner was my literary godfather. He was the most generous man I have ever known. I owe him everything. When I was only 20, he convinced Clarkson N. Potter to contract my book The Annotated Wizard of Oz as a successor to his own superb and now classic The Annotated Alice. He was always recommending me to editors he knew even up to last year. We often exchanged articles before publication to get the other's thoughts on the subject. Mine benefited inestimably from his input. While he could so adroitly explain the most complex concepts to layman and expert alike, he retained the curiosity and the heart of a child. His integrity was impeccable, his prose lucid and profound.
His influence was vast. Few realize that an article he wrote on L. Frank Baum and the Oz Books in The New York Times Book Review inspired the Broadway musical The Wiz. Who else was quoted by John Fowles in The French Lieutenant's Woman and named by Nabokov a character in Ada or Ardor? Of course it was his sister Judy, not Martin, who told me that. He was the gentlest and most modest of men. A true gentleman. Like everyone who had the honor of knowing him, I feel blessed to have been his friend and he mine. I will miss him terribly.--Michael Patrick Hearn
Posted by Bill Campbell 1 comment: 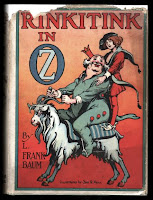 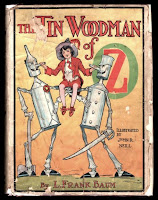 As I've said before, it does pay to get out and look at book dealers and antique shops rather than just limiting yourself to what turns up online. Some of the R&B jackets I have are later states, but I'm hopeful of eventually getting Reilly & Britton jackets on all the Reilly & Britton books - even if they aren't all first states!
Posted by Bill Campbell 6 comments:

In honor of L. Frank Baum's birthday, here's a photo of the local poppy field. Actually, it's part of a neighbor's yard a couple blocks away - every spring a mass of poppies bloom throughout the yard, and then are cut down for the grass to overtake. They've just started to burst and I thought it made an appropriate birthday greeting. So far there's no record of any neighborhood children or animals falling asleep in the flowers! 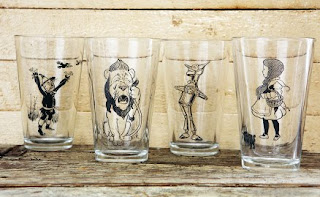 Here's a couple items I've recently run across. While in New York, I wandered through Fishs Eddy, a fun shop that carries a variety of dishes and housewares. Among other things, they offer a set of Oz drinking glasses featuring W. W. Denslow images of the famous four. Of course I picked up a set - though I think it's unfortunate that they didn't pick a better image of Dorothy! Some very fun dishes relating to Alice in Wonderland are also available. 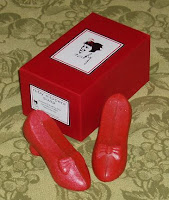 Friends occasionally run across Oz-related items and pass them on to me - for example, this set of glittery ruby slipper soap. Perhaps they produce Glinda bubbles? It just shows how embedded the Oz imagery is, particularly the MGM movie.
Posted by Bill Campbell 3 comments: 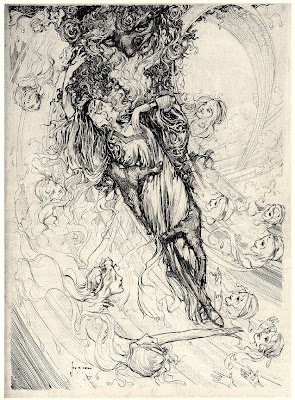 This illustration from The Road to Oz (1909), of Polychrome being drawn back up to the rainbow by her father, is one of my favorite John R. Neill drawings. It combines all the elements I like in his work, a sense of the fantastic with beautiful line work and lovely imagery. This is a drawing I'd love to own, as it would be a highlight in any Neill collection!

Polychrome's second appearance is in Sky Island, part of L. Frank Baum's attempt to break away from the Oz series. Her entrance in this book is featured in another lovely Neill drawing, this time a double page spread. It's an elaborate drawing, but not as finely detailed as the earlier piece. Many of the same elements seen in the earlier illustration are here, but the image just doesn't feel as powerful. I think this is because the elements are more decorative, rather than involved in the drama of the moment. Of course, I wouldn't say no to this drawing - once again, it's a lovely example of work by Neill! 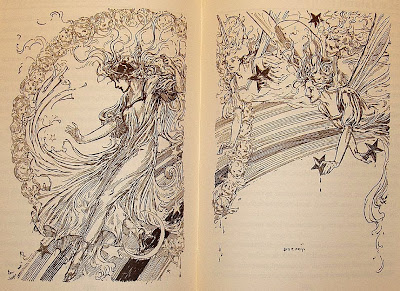 There are two more drawings by Neill of Polychrome returning to her rainbow. The first is in Tik-Tok of Oz. This time she is shown being unceremoniously pulled up by the disembodied arms of some of her sisters, rather than carefully gathered. And in Tin Woodman of Oz, she is pictured rising without the aid of anyone - perhaps by this time her father figured she had wandered away so many times, she was on her own for getting back home!
Posted by Bill Campbell 4 comments:
Newer Posts Older Posts Home
Subscribe to: Posts (Atom)