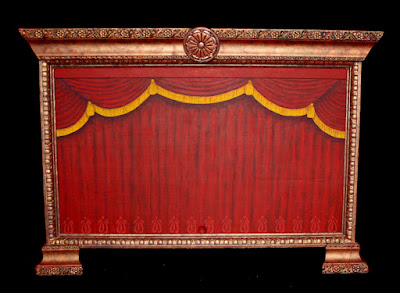 Lately I've been working on an ongoing Oz project. The 1903 Broadway production of The Wizard of Oz has fascinated me for some time, and I decided to make an attempt at recreating settings from the show in a toy theater format. Toy theaters were the play sets of the Victorian age, generally produced cheaply of paper that was cut and assembled to create sets and characters for a stage version of a popular story or fairy tale.

Of course to do this, I first had to come up with a theater. I decided I wanted something more substantial than paper, so after rummaging in the basement I came up with a wooden wine crate that seemed to be an appropriate size. Some more digging around produced some scrap moldings that had been in the house forever, and when combined, along with some balsa wood and paint, I came up with a very sturdy theater. (Clicking on photos will enlarge them for easier viewing.)

Once the structure itself was finished, it was time to work on a set. The original sets primarily consisted of a series of painted drops, which when layered together create the scene. I decided to start with the Poppy Field, which was consistently singled out in reviews as a highlight of the production. There are only a handful of visual references for the show, so I'm afraid my version can't be considered particularly accurate - but, it was an interesting challenge! 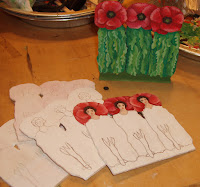 Of course, the stage wouldn't be complete without actors, so a number of figures were required. The poppies were originally an integral part of the set, played by chorus girls in large hats- I decided to make them double sided, one side flowers and the other side chorus girls showing a bit of leg - as chorus girls do.


When all the elements are put together, you get an approximation of the scene. Thanks to the availability of flexible mini LED lights, I was able to add the ability of lighting the stage - and in a variety of colors, which create different atmospheres. Sadly, it doesn't photograph terribly well - but then, theater is always better live, isn't it?

So, with a few more figures added we have the tableau of Dorothy falling asleep among the poppies. As this is the Broadway version, we also have Pastoria, Tryxie Tryfle and Imogene the cow. And Locasta, the Witch of the North, has arrived to save the day by calling forth a deadly frost....but that's the next scene. 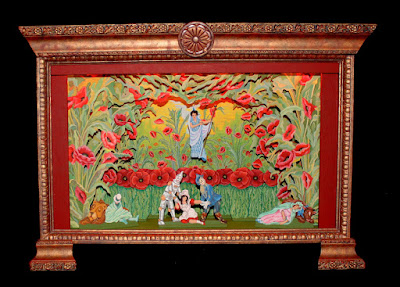