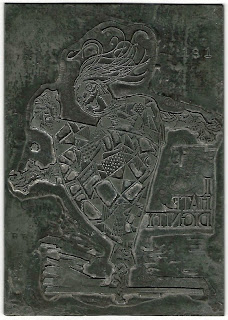 Here's a bit of an Oz novelty. This is an original printing plate, used by the publishers to print a full page illustration by John R. Neill in The Patchwork Girl of Oz. It's a classic image of Scraps, proclaiming "I hate dignity", while catching a stone she's kicked in the air. For a long time, the original printing plates from the Oz books were assumed to have been lost or destroyed, but in 2013 a series of them came to auction. They had been in the collection of rare book collector Richard Manney, and are the only plates known to have survived.

The plate is engraved in zinc, and the stamped number on the upper right refers to its placement in the book - page 131. In the original printing of the book, the illustration was in full color which would have required additional plates, one for each color. This is the black, or key line plate. When the color printing was dropped, in the 1930's, this would have been the only plate used. With the popularity of the Oz books, new printing plates had to be made as old ones wore out, and the publishers kept the original drawings by John R. Neill for this purpose. 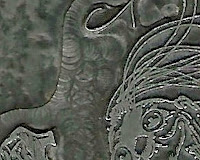 Creating the printing plates appears to have involved quite a bit of hand work, in addition to photo-mechanical etching. In this detail, the circular marks of a grinder, used to clean up the background, can be plainly seen.


This has been very nicely presented in a custom box which provides a space for the plate, as well as a new proof pulled from the plate. There is also a pamphlet containing an essay concerning the Oz illustrations, written by Michael Patrick Hearn. It's fascinating as an integral part of the creation of the Oz books! 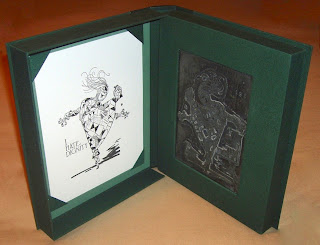 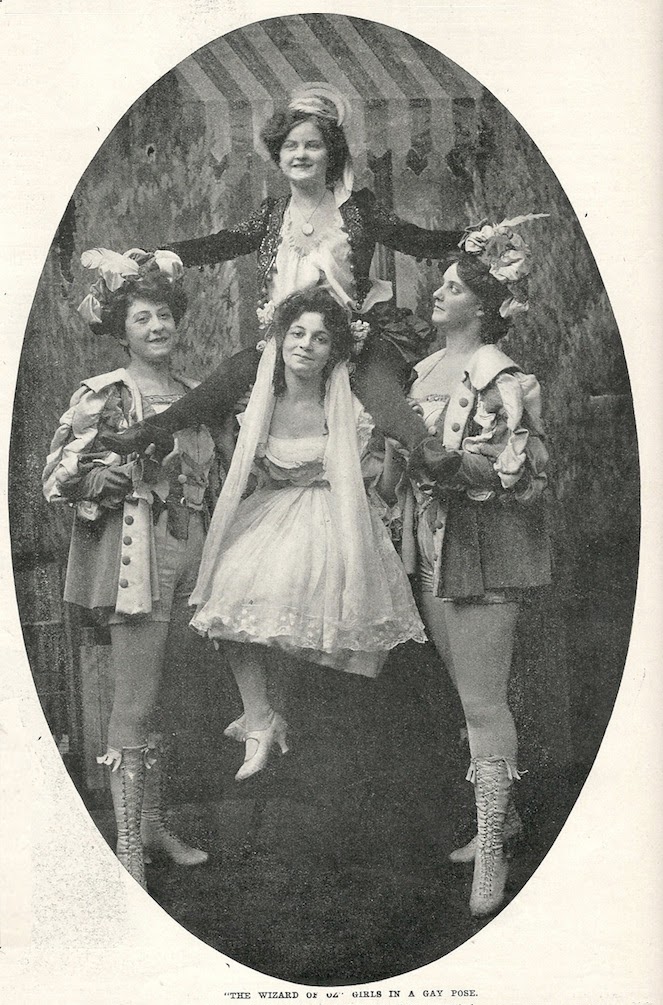 The Wizard of Oz was a huge Broadway hit in 1903, due in part to a fervid publicity campaign. The show ran for many years, often leaving town to tour, but returning for weeks at a time. A major attraction of the show, aside from the comedians Montgomery and Stone as the Tin Man and Scarecrow, were the quantities of chorus girls, in a variety of costumes showing quite a bit of leg! This was true of many shows of the period, and the traditions of casting women in male roles helped to provide opportunities for revealing the female figure in a variety of ways. 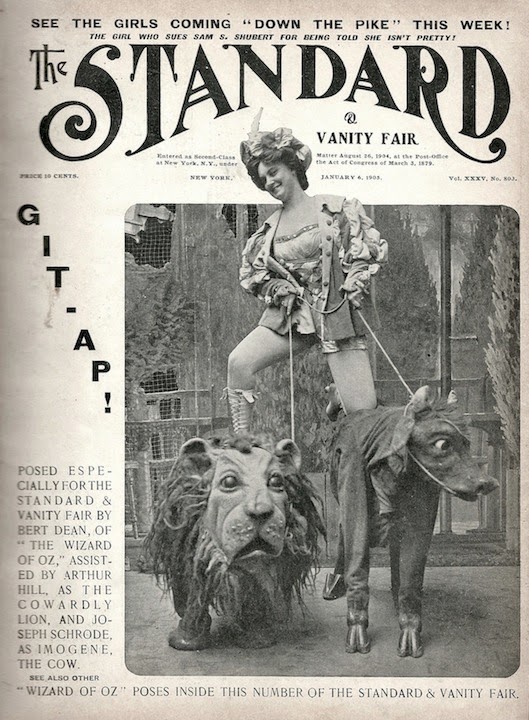 These photos are part of a series that were featured in the magazine The Standard & Vanity Fair. This was a weekly theater gossip/girlie magazine, featuring many photos of chorus girls doing provocative things like smoking...or kissing...or fighting...or simply showing off their figures in outrageous costumes! The cover from January 6, 1905 shows a rather bizarre pose of chorus girl Bert Dean riding on the backs of the Cowardly Lion and Imogene the cow... I have to say, Imogene does not look like the healthiest cow I've ever seen. 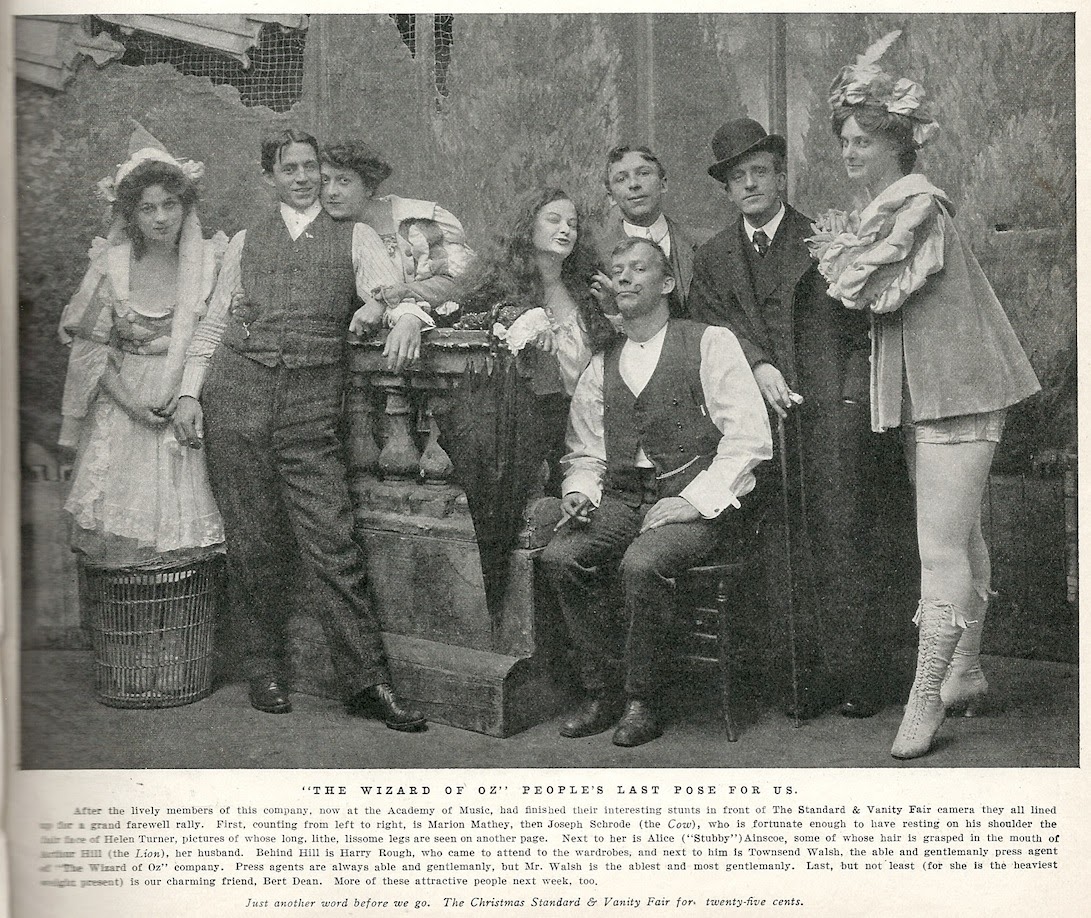 This issue was published with a string of photos featuring some cast members from The Wizard of Oz. Included were four chorus girls, and the two actors who portrayed Imogene and the Cowardly Lion. The feature was popular enough to be continued in the following two issues of the magazine. The photo above shows the participants as well as a wardrobe man and the show's publicist Harry Townsend. Townsend worked tirelessly to promote the production, as this feature from two years into the run demonstrates. 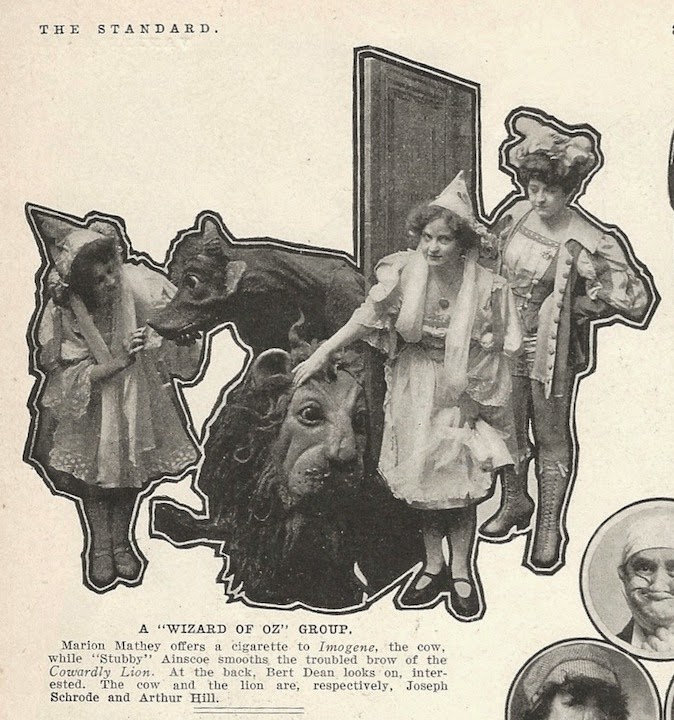 A number of the photos center around the animal characters. The fact that one of the chorus girls, Alice "Stubby" Ainscoe, had married the Cowardly Lion (Arthur Hill) a year earlier is mentioned several times. Ainscoe and Hill were both with the show from the start, and eventually, when the rights were available for amateur productions, the pair were instrumental in producing a very successful version of the show in Boston. In fact, Hill repeated his performance as the Cowardly Lion!

The costumes worn appear to primarily be those of Munchkin youths and maidens from the show, but the photos were taken at a photographer's studio rather than on the stage of the theater.

This is an excellent example of the real attraction of the magazine - chorus girl Helen Turner, smoking a cigarette with her hair down, in a comparatively skimpy costume. In typical hyperbolic verbiage, she's credited with the "most lengthened limbs on this hemisphere"!

The magazine is filled with similarly arch comments and pictures, but I think this is the most surreal of the photos - Arthur Hill wearing the Cowardly Lion's head, photographing two chorus members! The caption explains that Hill was an enthusiastic amateur photographer - but I think it would be difficult to focus his shot while wearing that head. On the other hand, this might prove to be an interesting way of costuming the lion in a stage production! 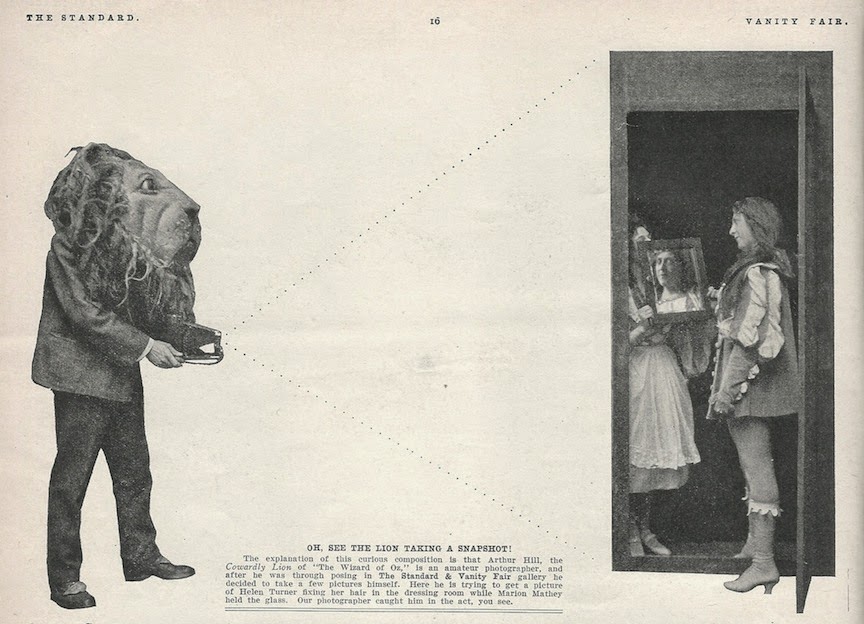