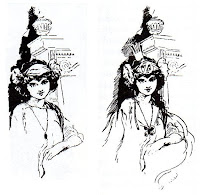 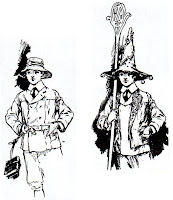 John R. Neill provided thousands of illustrations for the Oz books, so it's not too surprising if some of his images can be traced to other inspirations. Two very good examples of this were shown in the Autumn 1981 Baum Bugle, and are pictured on the left.

These two drawings were reworked for use in 1918's The Tin Woodman of Oz. Both of the original illustrations were created for a magazine article on child suicide, but with a bit of work, Neill has changed them into Oz characters. The young girl has been transformed into Princess Ozma, and the schoolboy has become Woot the Wanderer. It clearly involved quite a bit more effort to pull off the Woot transformation! 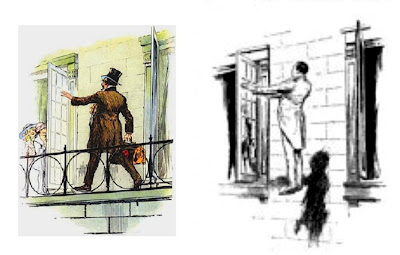 Here's another example that was recently pointed out to me by Michael Hearn. In this case we have a color plate of the Wizard's arrival at Glinda's palace, from 1920's Glinda of Oz, compared with a drawing for a 1919 article on spiritualism, showing a levitating figure. Unfortunately the quality of the image I have for the levitating man is very poor - but the similarities are quite obvious! If this is a case of reworking an existing drawing, I can't help thinking it might have been as easy to start out fresh!
Posted by Bill Campbell 1 comment: 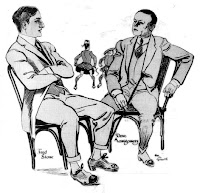 Fred Stone and David Montgomery became stars with the success of their roles as the Scarecrow and Tin Man in the 1903 Broadway hit, The Wizard of Oz. Stone lived a long life (1873-1959), raised a family and went on to appear in a number of stage productions, in some cases together with his daughters Dorothy and Paula, as well as films. On the other hand, Montgomery died rather suddenly in 1917 at the age of 47.

At the time, the duo was starring and touring in Chin Chin, a musical comedy loosely based on the story of Aladdin, but Montgomery's death ended the run of the show. Stone declared he would never take another partner but only work solo from then on - although there were rumors that he considered teaming with Frank Moore, who had been the star of another Oz production, The Tik-Tok Man of Oz. In this show Moore played the Shaggy Man - a variation on Fred Stone's Scarecrow! However, Stone was true to his word and did not take on another partner. 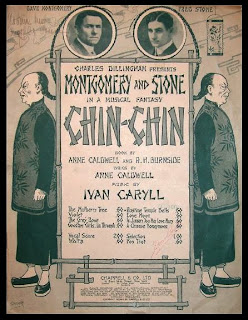 Montgomery joined a medicine show at age 16, and appeared in minstrel shows before joining with Stone in 1894. Stone was described as tall and gangly, whereas Montgomery was shorter and seemed to be known as "the little fellow" - so they would have made an amusing visual pair. Stone and his wife managed to get to the hospital before Montgomery's death - Chin Chin was playing in Montreal at the time, and Stone left the evening performance during the second act to get to Chicago, where Montgomery had been hospitalized.

Montgomery never married. Many articles were written at the time of his death, including a very sentimental one about the effect it would have on little Dorothy Stone, Fred Stone's daughter, who would miss her Uncle Craig - apparently Montgomery preferred using his middle name among friends and family. He was preceded in death by his father and an actor brother known as "Scamp", and also had a married sister. One article refers to the "other world in which he moved, that of the racetrack", and Stone mentions Montgomery's love of the ponies in his autobiography - summer vacations of trips to England and the continent were a regular occurrence, before returning to the theater for the fall season. Here's a very brief (all of 5 seconds) film clip of Montgomery & Stone: 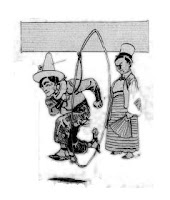 I've been unable to find any mention of what he died of - only that he was in hospital for about a month. In an obituary of Montgomery in the New York Tribune, the writer specifically remembers the Tin Man as "the armor plated, comically dolorous figure in search of a heart. He found the object of his quest - it was large and red and made of plush, and the Wizard used a can opener to insert it." 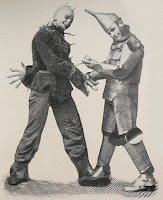