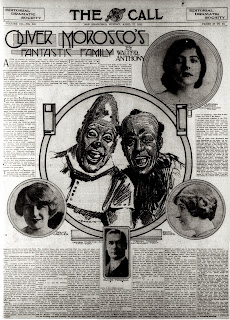 Happy New Year! I'm afraid I'm off to a slow start for posting, but I've been tied up with several projects, mostly non-Oz related.

Lately I've been looking at articles relating to the San Francisco production of The Tik-Tok Man of Oz. This show opened in Los Angeles on March 31st, 1913, where it supposedly played 5 weeks. But the Chronicling America newspaper site has a series of pages from the San Francisco Call, covering the 3 week period of April 21 - May 11, when the show was playing in that city - so clearly the L.A. run couldn't have been more than 3 weeks. At the upper left is a striking full page article published during the run, mainly about Oliver Morosco, the show's producer. All the images I'm showing will enlarge when clicked on - depending on your moniter size they should be readable. If not, they can be found on the Chronicling America website! 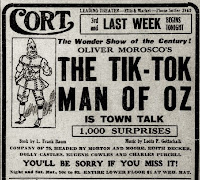 After San Francisco, the show was to move to Chicago for the summer before heading to Broadway. Of course, it never actually got to Broadway. One reason might be found in an interview with Dolly Castles, an Australian actress who played the role of Polychrome. She's quoted in one article as saying "did you see that matinee last Saturday when there was nobody in the house but dear little kiddies and their mothers and there(sic) aunts and a few uncomfortable looking gentlemen?" This probably didn't bode well for a New York run.

There doesn't seem to be an existing script for the show as it was finally produced, (actually Act One does exist - see comment below), but an earlier draft of the script, when it was still called Ozma of Oz, has been posted by the New York Public Library. On the left, I'm showing an article published before the opening of the show in San Francisco, which contains a synopsis of the story. It doesn't seem to stray very far from the earlier draft; the most notable difference being that the early script ended by pairing off Queen Ann and the Shaggy Man, and Betsy and Tik-Tok. The final version matches up Queen Ann and Tik-Tok, leaving Betsy and the Shaggy Man unattached.

The critic for the San Francisco Call enjoyed the show, although in the review (on the right) it was pointed out that the style of the piece was a throwback to an earlier time. But it sounds as though the show did good business during its run in the city, and was a popular success. It was reviewed again at the start of the second week of the run - this review can be seen at the bottom of this posting. 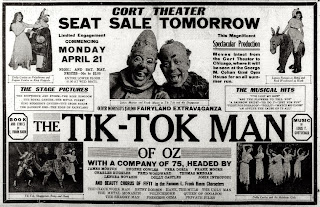 I'm showing two large ads for the show. The ad prior to the show opening (above) lists Charles Ruggles in the cast. But by the 2nd week of performances (below) he had been replaced by Charles Purcell. According to an article, he had "left the company to take important roles with Morosco's Los Angeles stock company". Of course Ruggles went on to become a well known star of films and stage. Purcell is billed as the "original chocolate soldier" due to his having played that role in the 1908 Oscar Straus operetta. It was a part he revived several times over the next 20 years. 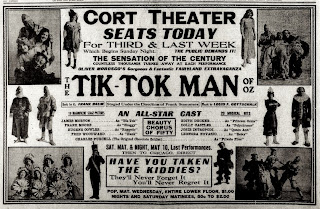