The Head of a Lion 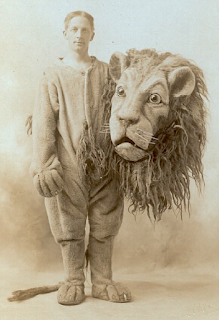 The Cowardly Lion was a popular element in the 1903 Broadway production of The Wizard of Oz. The character was played by Arthur Hill, and was a traditional 4-legged pantomime beast with no dialog in the production. Hill remained with the show throughout its long run and married a member of the chorus, Alice "Stubby" Ainscoe. The photo on the left, from the NYPL Digital Collections, shows the actor with his lion costume. 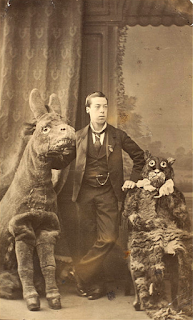 Hill had been portraying animals in English pantomimes for 8 years before landing the job in the Wizard. He was a pupil of Charles Lauri, (1860-1903) a celebrated English animal impersonator who was known for his versatility in portraying a variety of animals including monkeys, poodles, and Puss in Boots. On the right, Lauri is seen with two of his costumes.

Publicity for the 1903 Wizard of Oz made much of the news that the head for the lion was modeled after a famous painting by Rosa Bonheur. Bonheur was a French painter and sculptor, primarily of animals, and was one of the best known female painters of the 19th century. Her painting An Old Monarch was the supposed source of inspiration for the Oz lion head. The painting was well known in its time, and was loaned by George Vanderbilt for display at the Metropolitan Museum of Art in New York.

I can't say I see a particularly strong resemblance between the two! 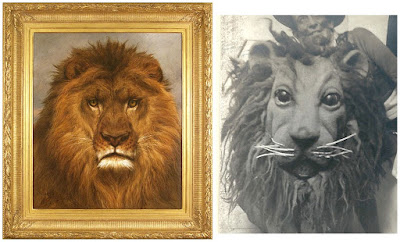