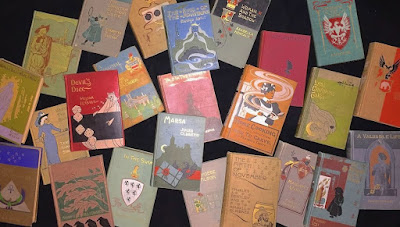 I’ve posted a number of times in the past about books published by Rand McNally, with cover designs by W. W. Denslow. Recently, I picked up a Rand McNally catalog of Holiday Books from 1898 that features quite a few of these titles. 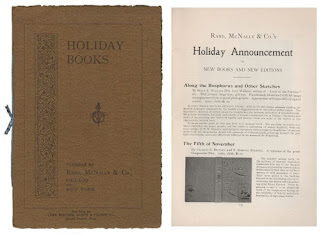 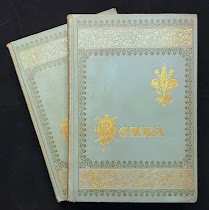 I enjoy seeing the verbiage used to sell the books - in some cases, like Enoch the Philistine and Romola, Denslow is mentioned as the cover designer. The presence of Denslow's name in connection with the design for Romola is nice, as it confirms that this is indeed a Denslow design. Of his various Rand McNally covers, this one looks the least like one of his works to me! 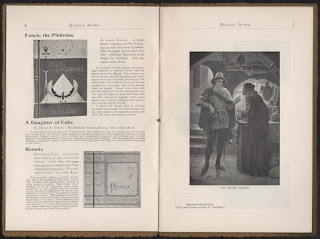 In others, like Phoebe Tilson, we are given the artist's description of the cover design - although Denslow isn't actually mentioned:
"In the words of the artist's description of the cover design, "Phoebe Tilson" treats of the life of an eccentric maiden lady who is dragging out a drab-colored existence in the gray atmosphere of a quaint New England village, when that existence is enlivened and entirely changed by the advent of a bright little girl child, a waif, left at her door. This child brings cheer and color into the neglected house as does the gay little geranium against the dusty panes of a garret window. The other side of the cover is suggestive of the tender care bestowed upon the "waif", while on the back (spine) is represented the locket which proved her right to her estates and a name beside the "Blossom"that she is." 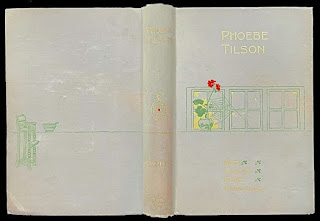 Illustrations are included from some of his other titles; the only books I'm aware of with interior drawings are An Arkansas Planter, and A Cruise Under the Crescent. 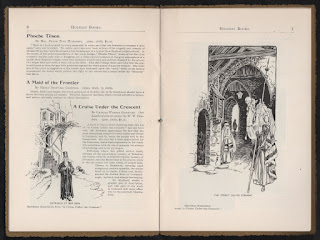 All in all, it's a fun little reference!
Posted by Bill Campbell 1 comment: 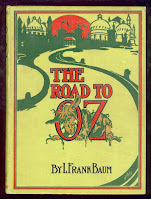 The original edition of The Road to Oz is one of the handful of Oz books featuring a jacket with a different design than the cover of the book. On the 1909 Reilly & Britton first edition, the book itself has a stamped cover and the jacket is a lovely watercolor of Dorothy and friends, with a metallic gold background. The metallic ink was only used on the earliest copies, and the jacket soon changed to a yellow or blue background, finally settling on yellow after 1920. When Reilly & Britton became Reilly & Lee and dropped the stamped cover, the jacket design was put to use as a paper label. Metallic jackets are few and far between - I don’t own one, the photo shown below on the right is a later version of the jacket with a blue background. 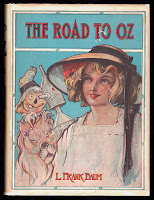 A little while back, I was involved in some discussions concerning the Road to Oz dust jacket, spurred by a fragment of a metallic gold Road jacket. On closer examination, questions arose as to the authenticity of the piece; in the end, it appeared to be a much later jacket that had been altered with gold paint. I thought it would be interesting to see how difficult it might be to do this, and decided to create a copy of the book with a metallic label. I chose to do this to a book rather than a jacket, as it would be a sturdier base to work on, and jackets - even on later printings - are still uncommon enough that I didn’t want to destroy one! The original book was never published this way. 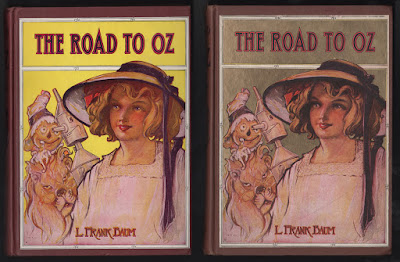 Different shades of yellow were used on the later printings of Road, varying from pale (which is rather attractive) to quite bright. I happened to have a late 1940’s/early 1950’s copy with the bright yellow background that I dislike. I masked the cover using frisket (an adhesive film), and cut out the background areas. With a couple passes of gold spray paint, I had created a non-existent variant of the book! The above photo shows the result. The book on the left is another copy of the standard cover, and on the right is my metallic version. It didn't take long, and the result is actually rather attractive! 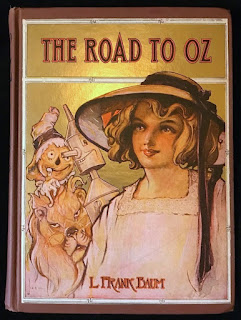 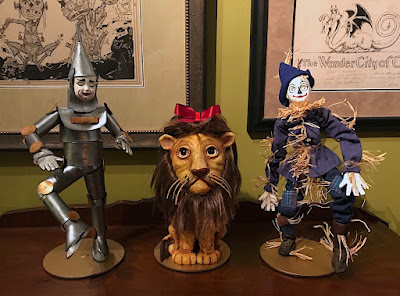 For the last couple weeks, I've been working on a fun project - some figures of the 1903 Oz stage characters. Here's my version of the Tin Man, Lion, and Scarecrow as portrayed by Dave Montgomery, Arthur Hill, and Fred Stone, respectively. 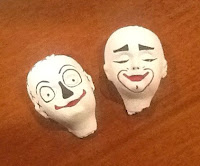 The project actually started several years ago when I molded a couple faces off of an antique doll head. I painted these up to look like Fred and Dave, and then put them aside. I finally found my way back to them, and as I usually do, worked with various scraps found in my basement to finish the figures. 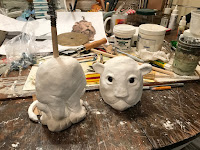 I then decided they needed a Lion, so I built him up as well, using more scraps and Sculptamold. The figures each have some movement built in - the Tin Man sways from side to side, the Lion's head wobbles and the Scarecrow sways forward and back. Who knows - maybe a Dorothy will eventually join them!


Edit 7/27/21 - Dorothy did indeed join the others, a few weeks later. She was just updated with a better wig - here’s a shot of the four together - 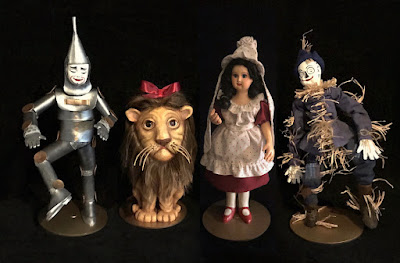