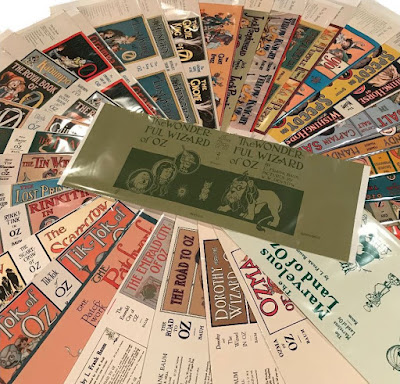 Recently, I’ve been scanning a number of dust jackets for Mark Terry at Facsimile Dust Jackets. He offers a large line of dust jacket reproductions for numerous books, including the Oz titles. I was able, along with several other collectors, to help fill the gaps so that an entire run of first state Oz jackets are now available. 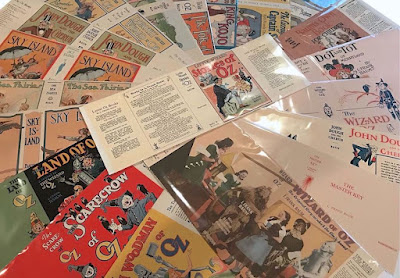 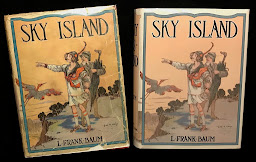 gh the metallic inks are missing from Emerald City, Road, and Dorothy and the Wizard, the jackets are beautifully restored and very presentable. There are some very rare jackets represented, which are fun to see, and there are other non-Oz Baum and Thompson titles available - on the left is an example of an original Sky Island together with the reproduction.
While a facsimile jacket doesn't add significant value to a book, the way an original jacket does, it does have decorative value. It's particularly nice in cases where the jacket has imagery seen nowhere else in the book. The jackets are clearly marked as facsimiles on the front flaps, and if you wish, it can be a fun way to spruce up a collection. I used a set of Baum firsts to dress up the set of Bradford Exchange facsimiles that I own. 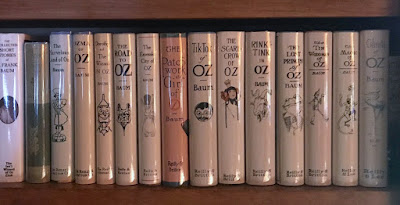 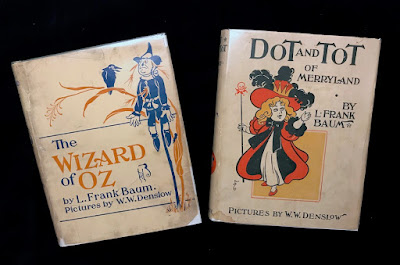 In 1913 the Bobbs-Merrill Publishing Co. leased the printing plates of their line of L. Frank Baum books to M. A. Donohue & Co., a discount printer. This was quite a prize for Donahue, as it enabled them to print cheap editions of the popular Baum titles, particularly The Wizard of Oz. These editions also undercut the prices of the new Oz books offered by Reilly & Britton during the same time period. This continued until around 1920, when the arrangement ended. 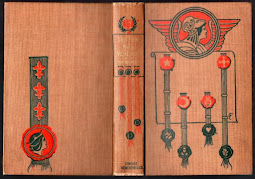 Donahue was established in 1861 as Cox & Donahue Bookbinders. The name changed to Donahue & Henneberry around 1880, and at some point became Donahue Brothers before landing on M. A. Donahue in 1901. As an interesting side note, W. W. Denslow designed a generic book cover for Donahue & Henneberry, (shown on the left), that was in use for a number of years. The company was based in Chicago and continued into the 1960's. 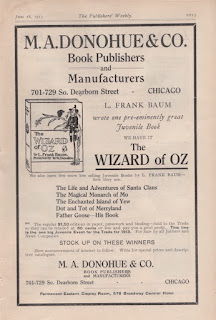 Pictured at the top of the page are two of the Donahue books, a Wizard and a Dot and Tot, both in dust jackets. The quality of the printing in the books declined during this period. At first it was essentially the same as the Bobbs-Merrill editions, but later printings dropped much of the color used in the interior. Still, Donahue was not shy about promoting their books; an original 1913 ad from Publisher's Weekly is shown on the right.
The publishers are quick to call The Wizard the one "pre-eminently great Juvenile Book" written by L. Frank Baum. They go on to claim that their copies are "the regular $1.50 editions in paper, presswork and binding — Sold to the Trade so they can be sold at 60 cents or less and pay you a good profit." Difficult for a retailer to argue with that!
Posted by Bill Campbell No comments: 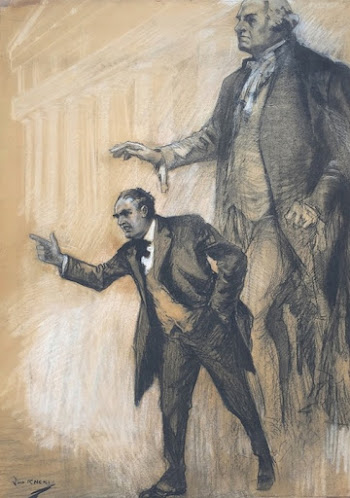 A second piece of artwork by John R. Neill accompanied the World War One letters mentioned in my last post. This drawing shows a speaker in front of a large statue of George Washington, with a pillared building loosely sketched in the background.
A government letter from Chalmers Wood, manager of the Speakers Bureau, mentions the
"...very handsome and decorative picture of the Sub-Treasury Steps speaker, which I am going to use for the exhibition of the work of the Speakers' Bureau...It just carries out the idea of what I wanted and should give visitors from upstate a very clear conception of what we can furnish them in the way of speakers." 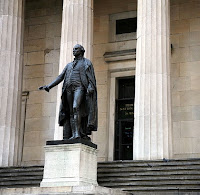 This particular drawing is set outside of Federal Hall in New York, the first capital building of the USA, where a statue of Washington stands. The drawing is approximately 3 feet tall, good for exhibition purposes! 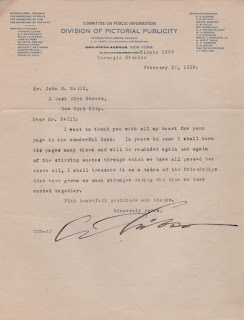 There are some interesting bits of information in the other letters. There was a Victory Dinner and Dance on Friday February 14th, 1919 at the New Commodore Hotel. A letter dated Feb 25th, from Charles Dana Gibson, thanks Neill for a page in what seems to have been a commemorative book. This was given to Gibson, and presumably contained drawings by the various artists associated with the poster project. Apparently a bust of Gibson was presented as well, but there was a problem. A letter dated March 10th, was sent from the secretary of the committee,
"appealing to the artists associated with the Department of Pictorial Publicity to help us out of our predicament by contributing a small donation - say from two to ten dollars."
The contributions were needed to cover a shortage of funds for the bust, dinner, and dance amounting to $500, which had to be addressed as quickly as possible! 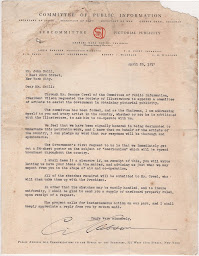 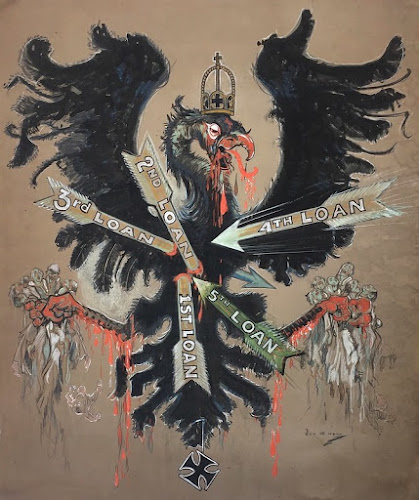 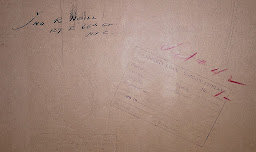 One of the letters thanks Neill for his contribution for the 4th campaign, so perhaps this is the piece referred to. On the back of the painting is Neill's signature and address, as well as a stamped box, to be filled out for Liberty Loan Window Displays. The presence of this box leads me to think that this artwork may have been used. I believe pieces of this sort were not necessarily intended to be made into posters, but were used in displays around the country. This is a large painting, close to 3 feet tall. Certainly the largest, and perhaps the most unsettling piece of Neill artwork in my collection!
Posted by Bill Campbell No comments:
Newer Posts Older Posts Home
Subscribe to: Posts (Atom)