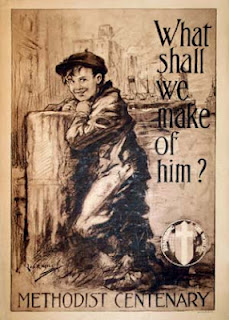 John R. Neill created a wide variety of artwork for various uses - story illustration, advertising, magazine covers, etc. I've also seen artwork created for posters, but until recently I had never run across an actual example of a Neill-designed poster.

I still haven't seen one in person, but Michael Hearn drew my attention to this piece. It was designed by Neill in 1919, as part of a series of posters created by various artists for the Methodist Centenary. This was a movement by the Methodist Episcopal church to raise $100,000,000 for "world up-building" and missionary work.

An article in Printers Ink from early 1919 states that 200,000 posters in 20 different designs would be produced - one design to be posted each week for 20 consecutive weeks. The head of the poster department was E.W. Willing, who apparently started the Sunday department of the Philadelphia North American newspaper - which also employed Neill on different occasions. Perhaps that connection helps explain how Neill was selected for one of the 20 artists!

I haven't managed to lay my hands on one of these yet, but I'll keep watching!

(I should mention, after thinking about it, that I'm aware of 2 posters created by Neill for the Oz series, one for Marvelous Land and one for Ozma. I believe these were found in the Baum family scrapbooks, and both have been reprinted in The Oz Scrapbook.)
Posted by Bill Campbell 2 comments:
Newer Posts Older Posts Home
Subscribe to: Posts (Atom)