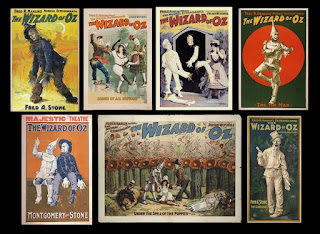 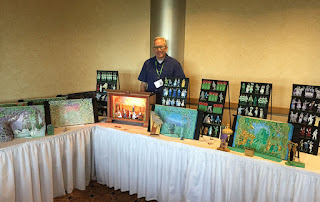 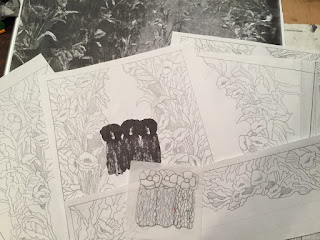 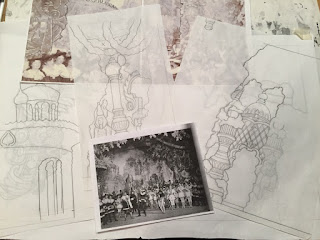 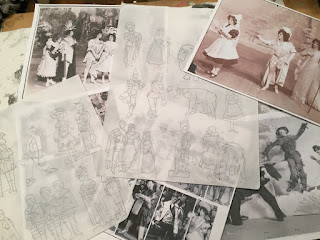 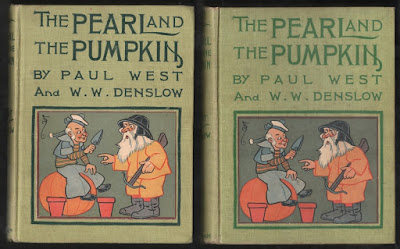 The Pearl and the Pumpkin was one of the most elaborate children's books W.W. Denslow would illustrate. With 16 color plates, two color illustrations throughout the text, a cover label and decorated endpapers, it was nearly as complex as The Wonderful Wizard of Oz.

The book was published by G. W. Dillingham in 1904, four years after The Wizard, and was still in print in 1913 due to Donohue reprints. It was originally intended to pave the way for a 1905 musical extravaganza by Denslow and Paul West, in the style of The Wizard of Oz, but the show was a failure. (Note: As David Maxine points out in his comment below, the show wasn't truly a failure - it just wasn't a smash hit like The Wizard.) 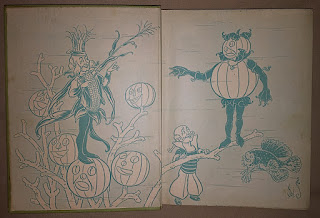 Denslow did produce lovely work for the book. An interesting point is the endpapers. There are two variants, one with the illustration printed in blue and the other printed in black and orange. Priority is uncertain, but the blue endpapers are generally considered earlier. For me, the illustration is easier to see in the single color of blue, than in the more elaborate 2 color version - I find the orange distracting! 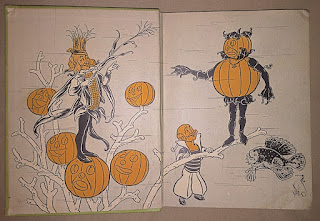 There is also a definite variation in the printing of the cover on the two copies I own. In the photo at the top of this post, the copy on the right has the blue endpapers and the printing on the cover and spine is a bright green. The other copy, with the black and orange endpapers, uses a much darker green, almost black in person.
Posted by Bill Campbell 1 comment:
Newer Posts Older Posts Home
Subscribe to: Posts (Atom)