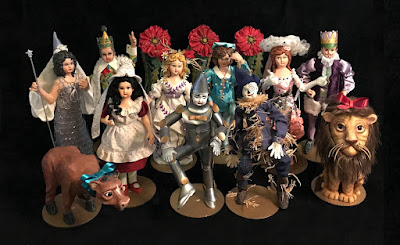 Back in October of 2020, I showed the start of a new project; toy figures of characters from the 1903 Broadway production of The Wizard of Oz. Over the past year and a half, I’ve continued to work with this idea, and now have 14 examples - 11 main characters and 3 chorus girl Poppies. It’s been a fun and entertaining way to pass the time during a pandemic! 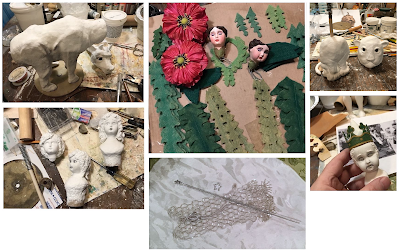 The figures are built from paper mache, dowels, and various scraps of wood and heavy cardboard. They're based on photos and costume designs from the show, although they aren't really portraits of the performers. The actors were lavishly dressed, and creating miniature versions has been challenging; some are more successful than others, but it's been quite a learning experience! 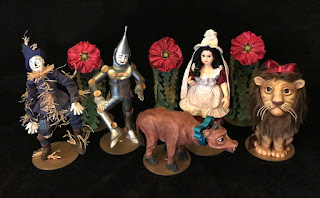 I started with the familiar characters of Scarecrow, Tin Man, Lion and Dorothy - then adding her cow Imogene, and the Poppies. After that I decided to continue on with the less familiar characters: Locasta (the good witch of the north), the Wizard, Cynthia Cynch (the lady lunatic), Sir Dashemoff Daily ( the poet laureate), Tryxie Tryfle (engaged to Pastoria), and Pastoria (the true ruler of Oz). 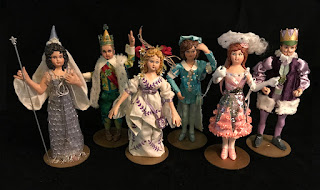 The characters are in stationary poses, but they do move. Each one has a mechanism built in to help them wobble, sway or nod, adding some motion to the mix!
Edit: After posting this, I finished one more character - the Snow Queen, summoned by Locasta to save Dorothy from the Poppies - 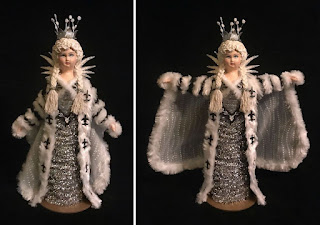