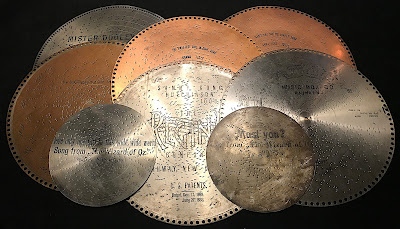 I’ve posted a few times in the past about music box discs of songs from the original stage version of The Wizard of Oz. I first became aware of these several years ago, from David Maxine’s Hungry Tiger Talk blog. At this point, I’ve managed to come up with 8 of the 12 songs that I know to exist. There might easily be more!

These are all popular songs that either originated with the show, or were interpolated into various performances. Sadly, I don’t believe any of the L. Frank Baum / Paul Tietjens songs received this treatment. Still, it’s an enjoyable way to get a taste of the show!

(If the video below doesn’t appear on your phone, check the web version of my blog).

Disc music boxes are very specific, in terms of what discs will play on what box. So, some songs were only available for certain brands of music box, while others were in wider use. In this case I’m showing discs from three different brands and two different sizes of music box!
Posted by Bill Campbell No comments: 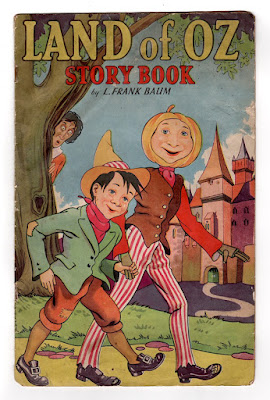 Here's a fun bit of ephemera - the Land of Oz Story Book, published in Great Britain by Hutchinson & Company. This is an abridged version of the second Oz book, 19 pages long, published in a softcover pamphlet form. Hutchinson also published the Land of Oz Paint Book, in a similar format; this had a cover featuring more characters, as well as interior illustrations to color, by the same artist. There’s no date, but I would guess these books are from the same late 1930's/early 1940’s period of the other Oz books the company produced. These were intended to tie in with the British premiere of the MGM film.

The cover shows Mombi hiding behind a tree, watching Tip and a rather unusual Jack Pumpkinhead pass by. Jack's human face is a bit disconcerting, and reminds me of some of the early 20th century stage productions, like The Wogglebug, The Pearl and the Pumpkin, and The Lady of the Slipper. 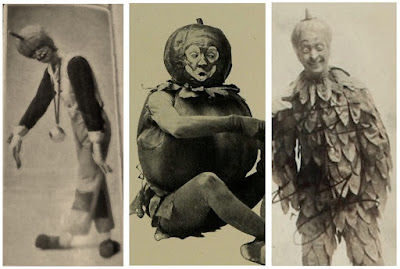 The interior makes use of several of the original John R. Neill drawings, but due to the format of the book, the placement can be rather haphazard. All three scenes shown below happened earlier in the story! 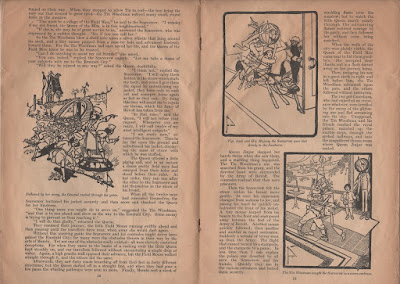 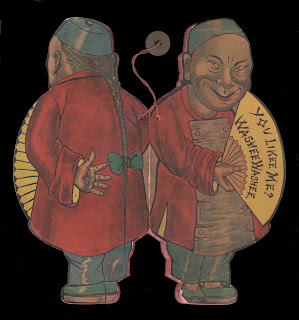 Here’s a little Reilly & Britton oddity, something unlikely to be published today - the Washee-Washee book of laundry lists. This was published in 1905, and while it is not an Oz book, it has the honor of having been advertised in the Ozmapolitan, the little newspaper created to publicize the Oz books. 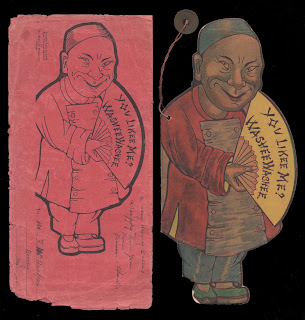 The booklet had its own mailing envelope, printed with the cover design and the address of the publisher, Reilly & Britton. This example is inscribed with "A very merry Xmas and a Happy New Year!" 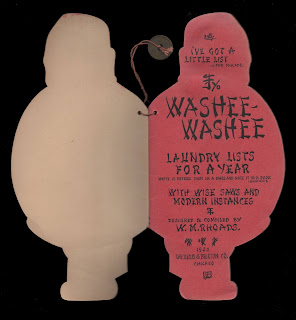 The book itself is intended to be used when sending out laundry to the cleaner, with appropriate spaces for indicating quantities of clothing articles. At the bottom of each page is a quote from a variety of sources, or as the title page says, "wise saws and modern instances”.
As an institution, the Chinese laundry has disappeared; but during the time period when this book was published, Chinese laundries could be found in every town across America. This was due to restrictive laws that blocked Asian immigrants from pursuing better jobs. The Chinese Exclusion Act wasn’t repealed until 1943. 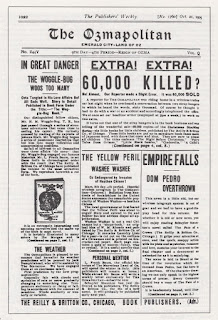 While the book is built around the kind of comic ethnic stereotype that is found offensive today, the advertising piece printed in The Publisher's Weekly adds insult to injury. This took the form of the front page of the Ozmapolitan, the newspaper of Oz, and refers to "The Yellow Peril" and "Oz endangered by Invasion of Heathen Chinee". It then goes on to explain that the Washee-Washee is simply a popular novelty book.
The same page advertises L. Frank Baum’s The Wogglebug Book, notorious for its use of humor based on ethnic stereotypes. In a rather bizarre reference, the Wogglebug is said to have been inspired in his exploits by the adventures of Johann Hoch; Hoch was the notorious Bluebeard murderer, who was captured in 1905 and executed in 1906. Other items on the page include The Christmas Stocking Series, (under the bold headline of 60,000 KILLED?) and Baum’s pseudonymous book The Fate of a Crown.
The image of the Ozmapolitan shown above is taken from the Baum Bugle. I don’t know if this was simply created as an advertising page for The Publisher’s Weekly, or if an actual paper was produced. In any case, it's quite a page of questionable content!
Posted by Bill Campbell No comments:
Newer Posts Older Posts Home
Subscribe to: Posts (Atom)