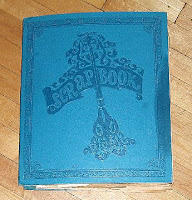 While digging around in the basement recently, I ran across my Bicentennial scrapbook. As a teenager outside Philadelphia in 1976, I was fascinated by the 200th birthday celebration - although I quickly grew more fascinated by the earlier Centennial and Sesquicentennial celebrations. These had included World Fairs held in Philadelphia, rather than random events around the region - but there were still a lot of things to see and do that summer. 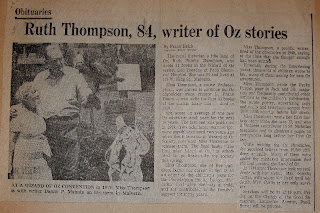 At any rate, aside from the various newspaper accounts of celebration events, there were two particular clippings I included in the book. The first is the obituary for Ruth Plumly Thompson, from the Philadelphia Inquirer. Thompson died on April 6th, 1976. I had only recently re-discovered the Oz books at that point, and had never read a Thompson title - at that time, her books simply were not available. I had already started rummaging through used book stores in the area, but had had little success in finding much Oz related material. I still remember my surprise at learning that she had lived in the region! 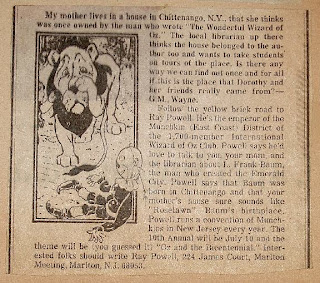 The other clipping is from an answer column that ran in the paper. This one is interesting as it's from a woman whose mother owned a house in Chittenango, NY, where she believed the author of The Wizard of Oz had once lived. The paper agreed that the house sounded like Roselawn, L. Frank Baum's childhood home, and suggested contacting Oz Club member Ray Powell for more information. This coming weekend is the 33rd annual Oz-Stravaganza! celebration in Chittenango - an event that started in 1978, a couple years after this column was printed! 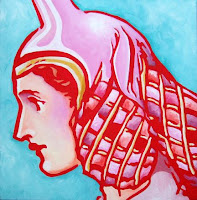 About a year and a half ago, I blogged about starting another Ozzy project - namely, small 12" x 12" paintings of John R. Neill illustrations of Oz characters. It's been a while since I've shown any of these, and as it's been an ongoing project, I thought I'd share a few more. 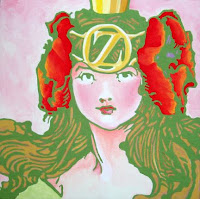 Today I'm showing some famous females of Oz. I think it's pretty easy to identify Glinda, Ozma, Dorothy and Scraps. These are a lot of fun to do, and I've enjoyed playing with various colors and styles. The images themselves are taken directly from Neill illustrations, and I tend to think of them as coloring book paintings. 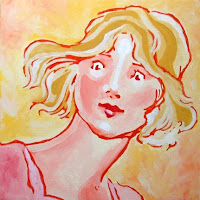 I have more that I'll be showing in upcoming posts. As these are small canvases, they don't take up a lot of space - but I am starting to develop quite a pile! They can be fun to arrange in various combinations - a sort of Ozzy Warhol effect! 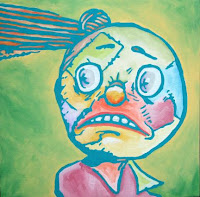 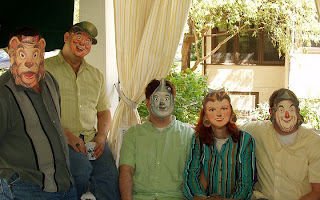 Don't forget - in honor of L. Frank Baum's birthday today, take a photo of yourself and something Ozzy in your life and email it to:  IWOCEvent @aol.com. Do it today!
Posted by Bill Campbell No comments: 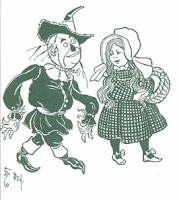 In Michael Hearn and Douglas Greene's 1976 biography of W.W. Denslow, there's an interesting passage quoting the artist on how he came up with the images for the Scarecrow and Tin Woodman. This was taken from a 1904 article in the Denver Republican newspaper -

"I made twenty-five sketches of those two monkeys before I was satisfied with them. You may well believe that there was a great deal of evolution before I got that golf ball in the Scarecrow's ear or the funnel on the Tin Man's head. I experimented and tried out all sorts of straw waist-coats and sheet-iron cravats before I was satisfied." 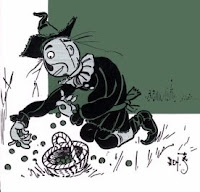 What's interesting here is that Denslow seems to be confusing his illustrations for The Wonderful Wizard of Oz, and some stage business worked into the theatrical version of The Wizard of Oz. I never understood the reference to the "golf ball in the Scarecrow's ear" until I learned more about the stage play. In Denslow's drawings of the character, I never noticed anything that looked like a golf ball! 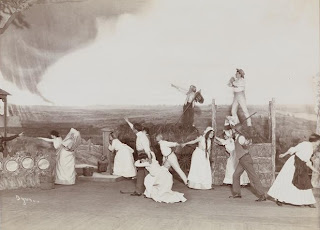 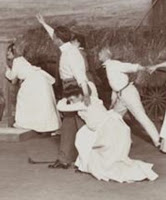 But, the stage show is a different story. During the opening Kansas prologue, before the cyclone arrives, a golfer wanders onstage looking for his ball. He flirts with one of the farm girls, the cyclone hits, and he's not thought of again. In the detail on the left, the golf club can be seen at the actor's feet as he reacts to the arrival of the twister. 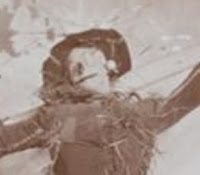 Then later in Oz, when the Scarecrow comes to life, one of the first things he does is remove a golf ball from his ear - the discovery of the missing golf ball! In the detail on the right from the production, the ball can be clearly seen, and in his autobiography Fred Stone even mentions strapping a golf ball to his ear for the part. Incidentally, it's also humorous to note, in the photo below, that the face of the actor playing Imogene the cow (Fred's brother, Edwin Stone) is clearly visible beneath the bow on the cow's neck! These stage photos are from the collection of the Museum of the City of New York. 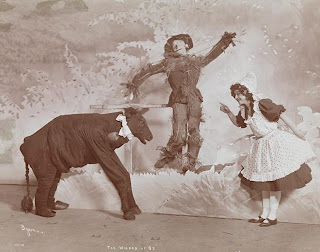 So, that's one of my little Ozian mysteries cleared up - and another proof that memories are not always reliable - even the memories of those directly involved in the creation of a legend!
Posted by Bill Campbell 2 comments:

In honor of L. Frank Baum's birthday on May 15th, Oz Club member Jane Albright is asking Oz fans/collectors/enthusiasts to take a photo of themselves that day showing how they enjoy Oz - then send it to IWOCEvent@aol.com. These photos will be used in a musical slideshow at the Oz Convention this summer in Banner Elk, NC (info here). Jane is looking for as much variety as possible, showing Ozzy crafts, gardens, clothing, vehicles, etc....so be creative! Here's one for me - it's pretty straightforward and a little early, but might as well get the ball rolling.  Remember, the idea is to take the photo on the day (May 15). It's a fun idea! 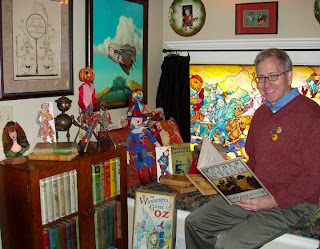