L. Frank Baum wasn't the only one to work for Reilly & Britton under a pseudonym. John R. Neill illustrated at least one book under the name Ivin Ney - as to why, I really can't imagine! A Knight of the Wilderness was published in 1909, and contains 6 color plates by Neill under the assumed name. The book deals with Abraham Lincoln's years in Illinois. After a little thought, the pseudonym does make some sense - it's a kind of Russian-ized version of his real name (Ivin/John, Ney/Neill). 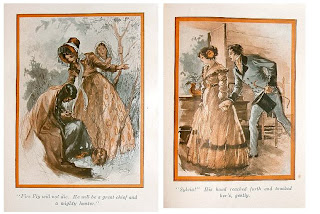 I don't know of any other examples of Neill working under this alias. 1909 was a busy year for him, with The Road to Oz and the start of the Neill Gift Book series of poetry books. Maybe Reilly & Britton was worried about too much exposure in various genres for their popular Oz artist. The ink and wash style of the illustrations for A Knight of the Wilderness is very much in line with the poetry books or Neill's magazine work of the time, as opposed to his Oz drawings.
Posted by Bill Campbell 1 comment: 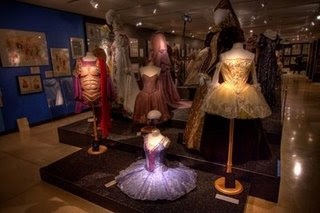 This past weekend in New York, I viewed the exhibit Curtain Call at the New York Public Library for Performing Arts. It's an impressive show, with many costume, lighting and set designs as well as actual costumes from theater productions over the past 100 years or so. The exhibition is celebrating the work of women in the technical aspects of the theater, contributions that are often overlooked especially in the early days. Unfortunately, photos were not permitted in the gallery but I did find the image above online at broadwayandme.blogspot.com. 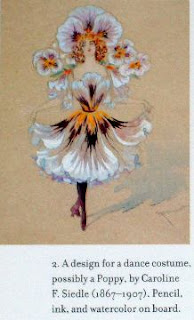 My particular interest was to see costume drawings by Caroline Siedle, who designed the costumes for the 1903 New York production of The Wizard of Oz. There was a nice display of about 16 of her drawings on one wall, as well as a tunic believed to be from an actual costume, although not from Oz. Unfortunately, the information given for Seidle is not terribly good - several costumes are called out as being from The Wizard that I'd be fairly certain are not. A lovely design of a floral costume is labeled as a poppy, when it's clearly a pansy. A costume for a young girl in a large sunbonnet, with a blue-checked dress is labeled as a Wizard design - it's easy to see how this could be confused with Dorothy from the book, but it certainly isn't the stylish young woman that Dorothy was in the musical. A similar design for a country boy in a straw hat is also listed for the Wizard — I think both credits may be wrong.

For those with more current Oz interests, one of the dresses worn by Glinda in Wicked is on display, as well as two of Susan Hilferty's costume drawings for Glinda and Elphaba. 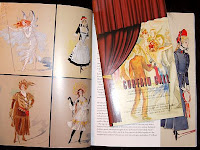 I also picked up a copy of the softcover book written to accompany the show. It can't really be called a catalog since there is no list of all the items in the exhibition, but eight Siedle drawings are shown, including one I don't recall seeing on display. This is a very fun design for a costume and hat with a bumblebee motif, again credited for The Wizard of Oz. Again, I'm doubtful whether this was designed for that particular show.

Siedle designed many costumes for a number of shows, including Babes in Toyland and other extravaganzas. There is little information available on this highly talented woman, and her career was cut short by an early death. Some of the drawings on display bear the stamp of the Metropolitan Opera, where her husband was a prop master. The girl and boy mentioned above and a couple other designs by Siedle, as well as several other women, can be seen at this link - http://www.nypl.org/news/articles/?article_id=255
If anyone is in the area, it's a fascinating exhibit, running until May 2nd.
Posted by Bill Campbell No comments: 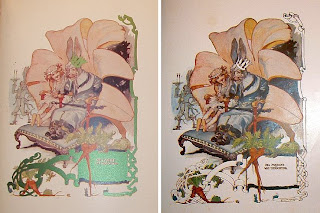 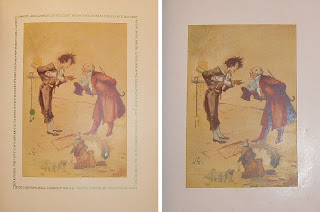 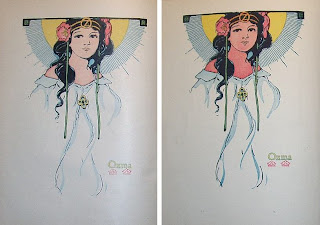 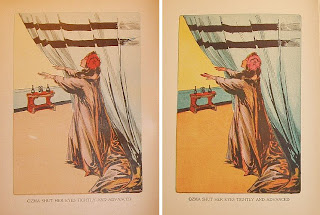 In the image to the right, a similar result can be seen with the earlier plate on the left and the later on the right.
Posted by Bill Campbell 3 comments: 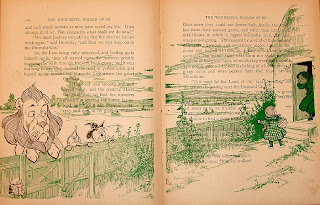 Later printings of The Wizard of Oz saw more than just changes in color plates; the color printing used throughout the text was also affected. A prime example can be seen in these two images.

The first is from an early Bobbs-Merrill printing, and the second is from a later Donohue printing. The Bobbs-Merrill pages are printed in a darker green ink than was originally used, making the text more difficult to read — but at least the entire image is there. 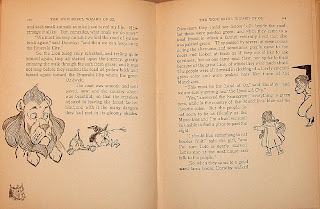 Donohue was a cheaper reprint house that leased the plates for the book, and turned out less expensive editions. One of their ways of saving money was to minimize the use of color throughout the book — one of the most unique features of the original edition! By dropping the green out of this text illustration, the image no longer makes any sense. Personally, I think they were cheating their customers; perhaps they should have been prevented from turning out such unattractive editions of this book!
Posted by Bill Campbell 3 comments: 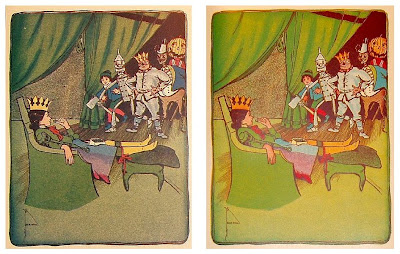