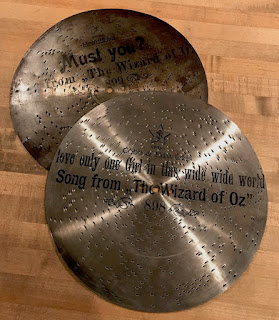 Oz-related music box discs are something I first became aware of several years ago, from a blog post by David Maxine at Hungry Tiger Press. Since then, I have kept an eye out for examples and have managed to obtain two songs written for the show, Must You? and I Love Only One Girl in This Wide Wide World.

I've become fascinated by the music boxes themselves. At the time of The Wizard of Oz there were multiple companies producing disc-playing music boxes. The disc players were popular from the 1890’s into the early years of the 20th century, when they were surpassed by the phonograph. The various companies produced boxes in a variety of sizes, and each brand and size required specific discs - they were not interchangeable. Consequently, it can be difficult to find a specific song for a specific make/size of box. I now own two different boxes, one a 15.5” Stella and the other a 9.25” Mira.


The two Oz discs I own are for the small Mira machine. The first video, above, is I Love Only One Girl, and the second video, below, is Must You? In the Must You? video, I also demonstrate the zither attachment on the box - this was an extra feature that was available, and originally added an additional dollar to the cost. It's basically a bar that applies pressure to the comb of the box, causing a much more plunking tone - similar in some ways to a harpsichord. It can be heard during the second chorus of the song.


In looking through catalogs for a couple different brands, I’ve found that generally the same songs were available for all the various machines. The arrangements could differ from maker to maker, and larger discs would have extended versions of the music - extra choruses, or additional elements. Unfortunately there are gaps in the lists I’ve seen, so it’s possible a song that's missing from one brand, but is present in another, may actually have been available in both.

I've come across six makers that offered a total of 12 titles of songs that were either written for or used during the run of The Wizard. There could easily be more, as Symphonium was another large producer, and further Criterion titles are probably out there. Several of the discs attribute the song to the show, as shown in apostrophes below. They are as follows:

Sammy turns up on five lists, it was the hit of the show! Finally, here's Mr. Dooley played on the larger Stella machine. This song was written for The Chinese Honeymoon, but was reused in the Chicago production of The Wizard, before its Broadway run.