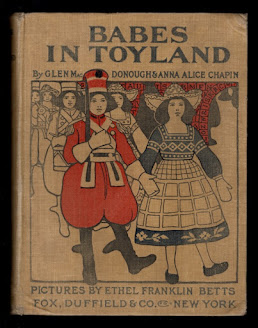 Babes in Toyland is not an Oz book, but there is a very strong connection between this book and The Wizard of Oz - both stories were successful Broadway musicals in 1903.

After the stage adaptation of The Wizard proved to be a hit, the producers came up with a successor to follow the wildly popular show. Using a production team that included many of the same designers and writers who worked on Oz, as well as some of the same actors, Babes in Toyland was the result. The musical is in three acts, like Wizard. The first act is based on a traditional pantomime, The Babes in the Wood, peopled with traditional nursery rhyme characters. Part of the second act is loosely adapted from The Wondersmith, a rather gothic tale by Fitz-James O'Brian, and the third act bears a strong resemblance to the previous hit, The Wizard of Oz! 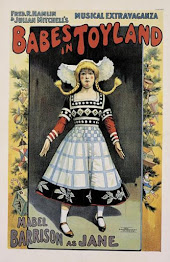 The stage show was a success, and included a lovely score by Victor Herbert, with several songs that are still popular today. There have been film and television adaptations based on the show, and heavily rewritten versions are frequently produced around Christmas time. But nothing has been as lavish as the original production!

It's interesting to note that the show does feel like a definite attempt to outdo the Wizard - instead of a spectacular cyclone, Babes has a raging storm at sea AND an erupting volcano. Instead of the transformation of a field of chorus girl poppies into a snowstorm, there is the transformation of the Spider's Forest into the Floral Court of the Moth Queen, with a troop of chorus girl butterflies. Both shows include a threatened execution in the third act. Babes is more bloodthirsty than Wizard, with several deaths. In spite of these attempts, I think The Wizard of Oz feels far more original in its story and characters.  A poster for the show can be seen above, sold several years ago at auction. 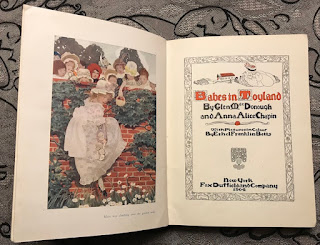 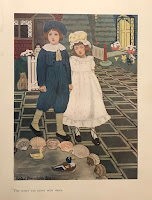 The book was published in 1904, a year after the successful extravaganza opened on Broadway. Glen MacDonough and Anna Alice Chapin are listed as the authors; Macdonough wrote the stage show, and I’m guessing the book was actually written by Chapin, using MacDonough's concepts and even some of the stage dialogue. It follows much of the first two acts of the show, with some changes - all love interests are cut, and the Toymaker, who is not an evil character in this book, doesn't die. At the same time, Alan and Jane's journey to Toyland is fleshed out with additional incidents. 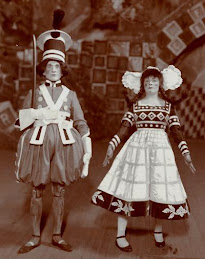 Earlier this year, I finished off a toy theater version of the show. Like my earlier toy theater version of The Wizard, it's based on the various scripts and photos I've been able to track down and reference. As with Wizard, it's not terribly accurate but an attempt to capture some of the visual aspects of the show. Unfortunately, I've been unable to find visual references for several of the scenes and characters, so I simply filled in as necessary!