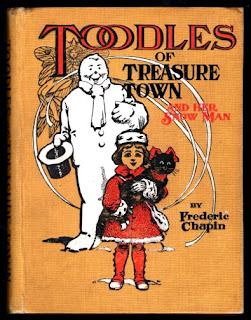 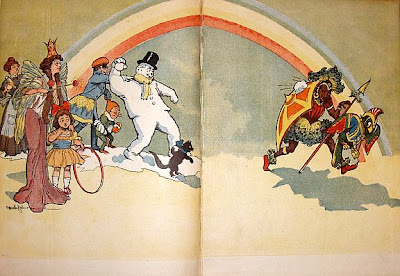 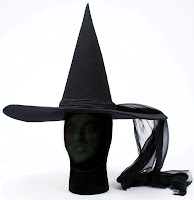 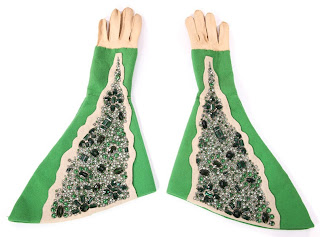 One of my favorite pieces was this pair of emerald gloves, which I've never seen before. Apparently they were used in the deleted Restoration Scene, when Dorothy and friends return to the Emerald City. It's quite the rhinestone work - a good companion to those famous slippers!
Posted by Bill Campbell No comments:

Over the years I've run across a variety of things used as bookmarks and left in Oz books. There have been assorted dried flowers and four leaf clovers, as well as popsicle sticks and toothpicks. On the right I'm showing a Christmas tag left in a first edition copy of The Tin Woodman of Oz, presented to Dorothy (how appropriate!) from Florence and Helen.

Advertising bookmarks seem to have been popular. This first one is for Stiefel's Medicinal Soaps, which supposedly possessed healing and antiseptic properties. It was left in a copy of Rinkitink in Oz.

The horseshoe design is from Bunte Brothers, and is very vague as far as what was being sold - other than it being "of superior quality and free from adulteration". This was found in a copy of The Road to Oz.

This third example is of a more recent vintage, for Corklyn Papeteries. I don't think I've run across the word "papeteries" before! I've forgotten where this one came from. 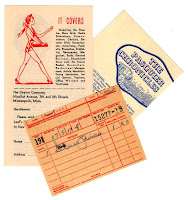 Another fun find was the original receipt from the purchase of a copy of The Silver Princess in Oz, dated May 17, 1938. This was left in the book together with flyers for two other books - not Oz stories.

I think my favorite is this drawing of a witch, found in a copy of The Wizard of Oz. Someone was being creative with triangles!

And of course there is the map of Oz which was laid into Oz books sold in 1920. I've run across a few of these, still in their books! 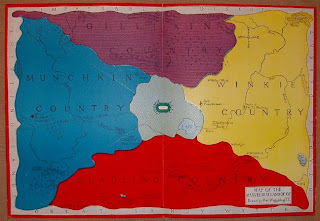 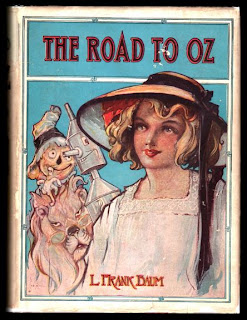 Here's a 1920 copy of The Road to Oz in dustjacket. What makes this special for me is the fact that the cover design features a blue background, rather than yellow.

The original Reilly & Britton version of this book only used this lovely cover image on the dustjacket, where it was originally printed with a metallic gold background. The book itself had a stamped cover with a different image. Later R&B printings used this blue background on the jacket.

When the publishers changed to Reilly & Lee, a cover label using the dustjacket art replaced the stamped cover. The earliest R&L copies used a yellow background, but this copy is from the very brief time period (1920) when Reilly & Lee used blue for the background on both the jacket and the cover label, before switching back to yellow for the remaining years.

I've wondered why they would switch back to blue for such a short time period - perhaps they were using up some leftover sheets? I've always preferred the blue to the yellow background.

The Baum family scrapbooks have an example of a printer's proof of this cover with a green background. There is also a blue wash over Dorothy's companions - apparently something that was not pursued in the final product. This rarity was featured on the rear cover of the Autumn 1990 Baum Bugle, and I've always been curious whether the green was a metallic ink, like that which was used in The Emerald City of Oz the following year. If anyone has seen this in person, I'd love to know!

Here's a lineup of the various colors tried and used on The Road to Oz dustjackets. I only have the blue one, and the green one doesn't seem to have been produced to be used, but wouldn't it be fun to have all four colors! 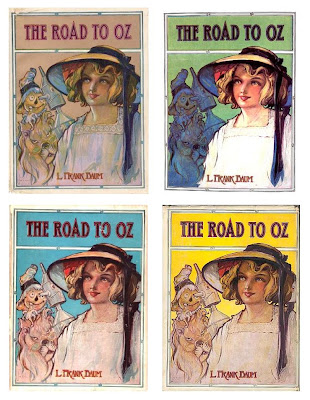