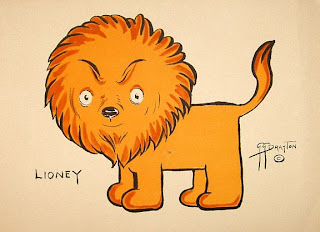 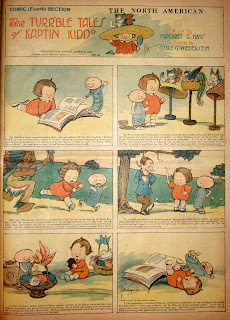 In an episode from Feb. 27th, Grace incorporates some characters from Alice in Wonderland into the strip. While her general style is a bit too cute for my taste, it's fun to imagine her take on some of L. Frank Baum's Oz creations!
Posted by Bill Campbell 1 comment: 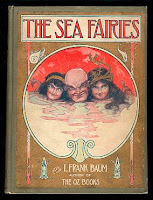 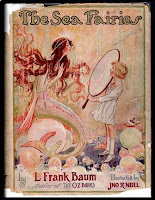 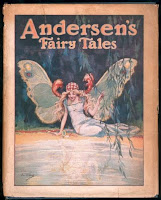 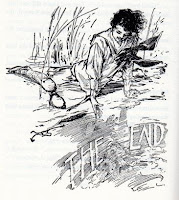 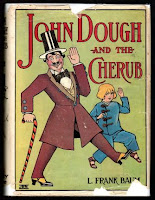 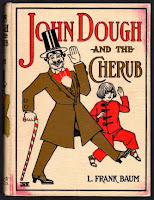 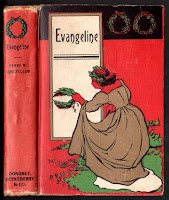 Here's another stock cover used by the publishers Donohue & Henneberry for a variety of titles. This cover intrigues me, as it it looks like it could be a W. W. Denslow design - but there's no definite indication. The design uses several common elements seen on Denslow covers - in particular, the band of color across the top and the repetition of a design element, laurel wreaths in this case. This cover was also produced in at least one other color combination. The image isn't signed, and there are aspects that don't look like Denslow to me - but it's fun to speculate and theorize! 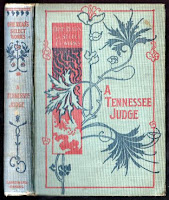 This cover was used by Laird & Lee for a set of works by Opie Read. Here again, there are elements that make me think of Denslow, but there's nothing to firmly indicate that this is his work - and it does look a lot like many other stock book covers from the time. Denslow did do work for Laird & Lee, and this particular title has a halftone frontispiece by him - apparently earlier printings contained 4 plates.

Part of the fun of collecting is keeping an eye out for possibilities - these may both be wrong, but they are intriguing!
Posted by Bill Campbell 1 comment:

Happy New Year! After a slow start, I'm finally getting around to a new blog posting!

I first saw one of these generic bindings by W. W. Denslow on the Hungry Tiger Talk blog, and of course I started looking for examples. Over the New Year's weekend, I went on an antiquing expedition, and managed to hit the jackpot, finding several copies from several different dealers!

This binding was designed for the Donohue & Henneberry publishing company. The name changed to Donohue Brothers, and finally was shortened to Donohue, the same company that produced cheaper editions of a number of the early L. Frank Baum books. Examples of all three names can be seen on the bindings pictured.

Quite a variety of titles were issued in this cover, in various colors - I have blue, green, brown and grey - and sometimes the same title is seen in different colors. The copies I have are all stamped in red and either black or dark green. It's a fairly elaborate design, compared to some of Denslow's other cover work - I just wish the publisher had stamped the book titles on the front cover, within the box that seems designed to hold a title!