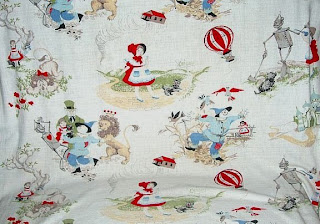 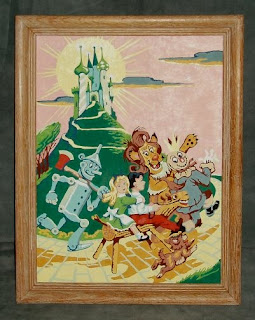 Paint by number pictures have become a popular collectible. I don't collect them myself, but couldn't resist this particular one, which is intriguing. It includes the Sawhorse from The Marvelous Land of Oz and a young boy (possibly Tip?). The characters are a little more generic, particularly Dorothy who looks remarkably like Alice from Wonderland, but the inclusion of a character from a later book is rather unique. This piece seems to date from sometime in the late 60s/early 70s, and the couple examples I've seen have all had the same frame - it must have been included in the kit!
Posted by Bill Campbell

I used to have that picture on my wall as a child in the late 70s. I wish I could find one for my daugters room.

They do turn up on eBay on occasion - it's a fun little picture.