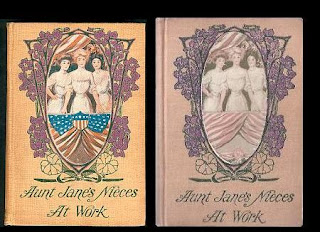 A while back, I showed two variations of the cover of Aunt Jane's Nieces at Work. The first was the original cover which included a shield and blue printing, and the second was a later printing that modified the cover and eliminated those details. I've picked up another variation, this time a possible binder's error. Instead of using the At Work paste-down, the design for Aunt Jane's Nieces in Society has been glued to the cover. There are many unusual variations/mistakes of this sort in Reilly & Britton books, and it's always fun to run across fresh examples. I thought this would be appropriate for April Fool's Day! 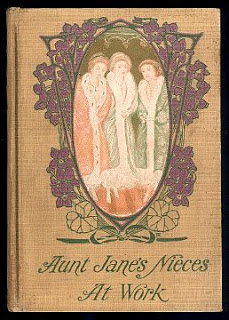 According to The Books Collectors Guide to L. Frank Baum and Oz, this copy is a 6th printing and would date from around 1915. Label mix-ups of this sort did happen, and I would imagine they might be more prevalent in late copies of the Aunt Jane books if the publishers were using up whatever stock of labels they had on hand. When the company became Reilly & Lee in 1919, they quickly stopped using any cover labels on these titles.
Posted by Bill Campbell

My copy of "Society" has the paste-down from "Out West."

They certainly created a lot of variants for these titles - mostly unintentional, I'm sure!