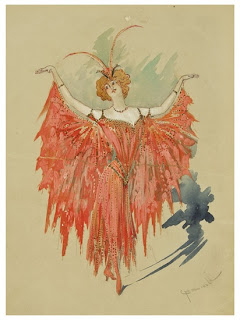 Last week's auction held by Bloomsbury Auctions in New York featured several rare Oz and related pieces, including original artwork by John R. Neill. But the piece that intrigued me, which unfortunately I didn't win, was this lovely costume design by Caroline Siedle for Babes in Toyland. I've talked about Siedle here before, as she designed costumes for the Broadway production of The Wizard of Oz among a number of other shows. It's interesting that there seems to be confusion about her name - I've seen Siedle, Seidle, and Siedel used in various places! I don't know which is correct, but her obituary spells the name Siedle. I believe this is also the spelling on her tomb at Woodlawn Cemetery in New York. (After writing this this morning, it occurred to me that the obvious way to figure out the answer is to look at her signature! She spelled her name Siedle.) 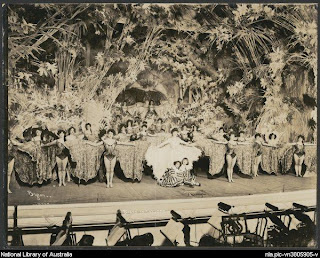 This particular design was for the Moth Queen (Edit - I don’t believe this was for the Moth Queen, who I believe was costumed in white). Synopses of the original storyline for Babes in Toyland seem to vary, but I believe the Moth Queen helps to rescue the Babes from the Spider's Forest, a scene that sounds reminiscent of the rescue of Dorothy and her companions from the Poppies in The Wizard of Oz - not too surprising as that was inspiration for this later show! I found the photo shown above, featuring the moths, on an Australian website.
Posted by Bill Campbell

Hi, I just spotted this beautiful sketch of Caroline Siedle here.
"Siedle" is the correct name. Caroline's husband was Edward Siedle, who was the properties manager of the Metropolitan Opera in New York. His family came from Furtwangen (Black Forest, Germany). They were clock-makers and parts of the family immigrated to England. Caroline was English born.
Stefanie

Thanks for the additional information - I'd love to see more information surface about her life and career!

Born in England, Caroline Siedle (1867-1907) was one of the earliest designers to receive credit for her work in theater programs. After she married Edward Siedle, the properties master at the Metropolitan Opera, she established an atelier in New York to serve the theatre trade and began to design costumes at the age of twenty-two. In her short career of eighteen years (she died at age forty) she designed fifty-eight musicals on Broadway, an average of three per year. Of the fifty-eight designs, she was the single designer listed for forty eight of them.
If Siedle is remembered at all today, it is probably for three Broadway productions: The Wizard of Oz (1903), with the libretto by L. Frank Baum, Babes of Toyland (1903), composed by Victor Herbert, both directed by Julian P. Mitchel, and Piff!Paff!!Pouff!!! (1904),directed by Gerard Coventry.
Siedle obviously had a comfortable working relationship with Julian Mitchell, and they worked on thirteen productions together. Of her, Mitchell is quoted as saying, “Without her assistance I should never have been able to carry out the musical comedy color schemes which have made beautiful stage pictures” (Greene 2008, 18) […].

During her short career Siedle worked with Ziegfeld, Lew M. Fields, Charles Frohman, and the Shuberts. She also worked with some of the best-known scene designers of the period: Homer Emens, Ernest M. Gros, Frank Dodge, Ernest Albert, Joseph A. Physioc, and Francis Gates and Richard Gates, who in partnership with E.A. Morange had founded the Gates and Morange Studios, an important scenic house of the time. It is also noted in her production credits that she was a director, and she is listed along with R.H. Burnside as responsible for the staging of the musical The Social Whirl that played 195 performances in 1906.
In a career that was much too short, Siedle was noted for her “graceful, feminine costumes” and her contribution to “America’s visual culture with her designs.“ “Her ability to design,” said Julian Mitchell, “amounted to genius” (Greene 2008, 18). Siedle practiced a meticulous rendering style. Her finely drawn and detailed costume designs remind one of the carefully done color illustrations that might grace a book on design.
Steiner-Strauss notes, “The only work by Siedle in the possession of the Theatre Museum is charming ‘Spirit of Gambling’ – a lovely young lady in a hot pink evening gown standing a pose that comically satirizes The Statue of Liberty. Of all the designers represented in the Theatre Museum, her work best demonstrates the style of the fin de siècle: with some elements still reminiscent of the historicism of the late nineteenth century. Siedle’s costume designs have a captivating charm, and she often chooses daring poses with which to present them.” (From “American Broadway Costume Designers in the Theatre Museum in Vienna, by Delbert Unruh and Ione Unruh, with Alexandra Steiner-Strauss, 2013).

I found in our local thrift store two costume drawings by Caroline Siedle. The writing below the etchings refer to "Muggins - Chimney Sweep - Act 1" and "Muggins - Second Dress - Act 1. They are framed and in wonderful condition. Any ideas as to date, which opera, or value? Thanks.

What a nice find! Siedle worked on so many productions, it's difficult to say what they might have been intended for. She died in 1907, so they would be before that date. If you have images that you'd be willing to email to me, I'd love to see them. My email is wcam60@aol.com. Thanks!

Hi Stephanie, I am Caroline Siedle's great grandaughter. My mother was named after her and also became an artist, working for Terry Tunes and Vogue as an illustrator. She told stories of her and her brother and sister playing in the attic , acting out all the different characters they found in the boxes of Caroline Siedle's sketches. My cousin was named after the Edward Siedle 's ( grandfather and great grandfather. It s great to read more history here!

What a fun connection to have! Have any of her sketches survived in the family?

Hello "Unknown," and thank you for your post. A very distant cousin of mine, Bertha Waltzinger (1867-1927) was a soprano from Madison, Wisconsin (her parents were immigrants from Germany). She sang in comic opera in companies such as "The Bostonians," the DeWolf Hopper Company,the De Koven/Smith and the Jefferson De Angelis opera companies. There were four productions in which she wore costumes that were designed by Caroline Siedle and made by the then famous N.Y. costume designer Henry Dazian. The comic operas were "El Capitan" by John Philip Sousa, "The Mandarin" by Reginald De Koven, "The Jolly Musketeer" by Julian Edwards (He was the brother-in-law of Edward Siedle, Caroline's husband), and "1999" by Edouard Holst. I would imagine that Bertha knew Caroline and Edward. I would love to get in touch with you. My e-mail address is Stefanie.Walzinger@t-online.de Looking forward to hearing from you. Stefanie Walzinger(I live in Freiburg, Germany/Black Forest area. The Black Forest is the place were Edward Siedle's parents came from (they were clockmakers))