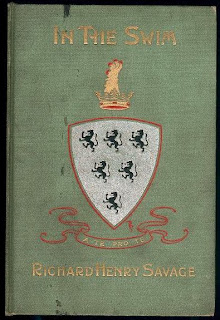 An archive of Rand McNally titles was recently offered at auction, including many books with W. W. Denslow covers. I didn't win the auction, but I have been able to add several titles to my collection through the kindness of Cindy at Avant Garde Books - the auction winner. Consequently, here's yet another Rand McNally title with a Denslow cover, this time In The Swim by Richard Henry Savage.

In The Swim was published in 1898. This book and my copy of Lost Princess Falka both came from the collection of books mentioned above, and both bear a library label on the spine, presumably from the Rand McNally archive. "EDITORIAL" is rubber stamped inside the front cover on both copies. In comparing notes with Cindy, I am finding that there are more variations on these many covers than I expected, which is surprising considering how difficult the books can be to find. 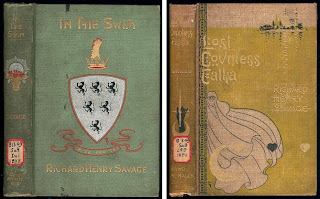 This title is an example of Denslow's simpler shield covers, which he came up with for several books. In spite of its simplicity, the cover is stamped in both gold and silver. Most Rand McNally titles include gold stamping, but off-hand the only other title I know of to use both metallics is The Waters of Caney Fork.

In my past examples of titles by Savage, I've commented on the excessive use of exclamation marks throughout the books - practically on every sentence. Oddly enough, although this book is also written by Savage, it appears to be perfectly readable without any excessive punctuation. It is later than either of his other titles that I've mentioned - maybe the editors caught on to the problem. I'm looking forward to reading the book to learn the significance of the cow on the spine!
Posted by Bill Campbell