Summer seems to be the time for Oz conventions and festivals! Unfortunately, I don't tend to get to any, but there are quite a few to choose from.

In previous posts I've mentioned the Chittenango Oz-Stravaganza which was held last week, and the upcoming IWOC National Convention at The Land of Oz Park in Banner Elk, North Carolina (Aug. 5 - 7 ).

There's also a Chesterton Wizard of Oz Festival in Indiana in September, and this coming weekend is the Judy Garland Festival in Grand Rapids, Minnesota. 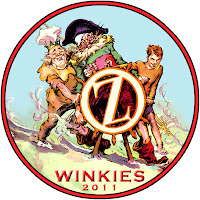 But the longest running convention is the Winkie Convention held in Pacific Grove, California, coming up on July 8 - 10. This years theme is Under the Sea, celebrating the 100th anniversary of L. Frank Baum's The Sea Fairies, and the 80th anniversary of Ruth Plumly Thompson's Pirates in Oz. There's even a WinkieCon Boutique on Zazzle, providing shirts and tote bags, featuring the two lovely images seen in this posting!
Posted by Bill Campbell

Do you go to Winkies? I have been in the past but not for quite a few years. Hope to return again sometime though!

I have not been to Winkies -actually, the only convention I've made it to was a Saturday afternoon at an Ozmapolitan convention in Wisconsin, a long time ago(maybe 15 - 20 years?)I know, it's time to try to get to another one!

They are fun and the auctions are a great way to get some bargains!