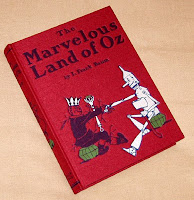 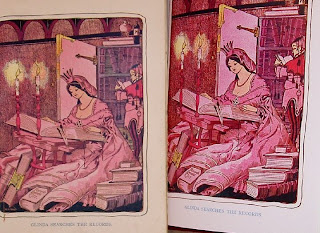 Bradford is working hard to create the real heft and feeling of the original books - the stamped fabric covers have been very well done. With Wonderful Wizard, a decision was made to reproduce the book in its earliest state, with several misprints and details that were changed in later printings. Marvelous Land is a hybrid of the earliest state binding, with no silver outline to the title, but the second state text - some swapping of illustrations and a publishers line added to the copyright notice. I'm not sure why they didn't follow the same first state idea for this volume. Anyway, these are quibbles and the books are quite attractive. In the end, the only way to have a true first edition Oz book is to buy a first edition Oz book - but these make a very decent substitute.
Posted by Bill Campbell

I know the Rinkitink from Books of Wonder excises an illustration of Tottenhot because it suggests a human being is lesser than an ostrich (even an ostrich wearing spectacles), but I don't know what other differences there are between the BoW books and the originals. Has anybody made a list?

There are only a couple changes that I'm aware of - the dropped Rinkitink illustration you mentioned, and another illustration in Patchwork Girl. In both cases, the character pictured was a Tottenhot, a very stereotypical black native. Patchwork Girl also changed a dialect verse about "coal black Lulu" to "cross-eyed Lulu". All very minor changes, but enough to cause controversy! Otherwise, the differences come down to the physical books themselves - printed covers rather than stamped fabric or paper labels, etc. (actually, the original printings of the BOW Marvelous Land did have a stamped fabric cover). As I say above, this is an excellent set of the books and in a better price range - but the Bradford series is closer to true facsimiles.

Thanks. I'm not going to devote myself to seeking out (& paying for) a set of firsts (if I were going to I would have by now), but I would like editions with all the illustrations and original text.

The Books of Wonder edition of MARVELOUS LAND OF OZ (at least te earliest ones) omitted the Montgomery-Stone endpapers.

That's among the various things that keeps the books from being complete facsimiles. I believe it was felt that the endpapers wouldn't mean anything to current readers, as Montgomery & Stone aren't the household names they used to be!