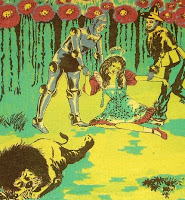 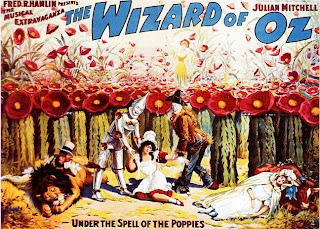 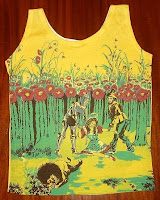 This possibly dates from the 1970's or so - there's no real indication other than an original price of $2.98 (marked down to $1!). There seems to have been far more variety in the presentation of Oz characters prior to the 1980's and the 50th anniversary of the MGM film. The appearance of Dorothy and friends as seen in the film became the norm on merchandise - it's refreshing to see something a bit different.
Posted by Bill Campbell

Wow! I so want this! A few questions... Does it seem to you to be a one-off silkscreen project or does it seem commercially produced.

Does the price tag seem to be from an original store SEARS? say or is it possibly an added tag from an used clothing shop. Just very curious.

I'd be very surprised if it dated from the 1970s I can't think where the manufacturer could have seen the image. I know of only two copies of the poster that survive and it wasn't ever printed in a book till the BUGLE cover of 1981. Anyway, quite fascinating!

It's a bizarre shirt, isn't it?

There's not a whole lot to go on with this one, but it does seem to be professionally made - it's a yellow knit fabric, plain on the back, and the image was printed before the shirt was sewn up. There is a size/material/wash instruction tag sewn into the reinforced binding in the neck area, but there's no manufacturer name.

The hanging tag on it is generic, listing size and material (50/50 cotton/poly) and a handwritten price. I imagine it could have been added by a used/vintage clothing store - but it does have some age on it.

Overall it's a bit of a mystery, but I should think there are more of them out there. I find it humorous that the artist tried to update Dorothy's hairstyle - I mean, why bother?!

I didn't know the history on the original poster, other than it's obviously rare. It was published in the Oz Scrapbook (in b&w) in 1977, so maybe that provided the inspiration. As you say, it's unlikely someone would be familiar enough with the image to do this, prior to it being published somewhere. Or maybe there's a t-shirt shop out there with a very rare poster hanging on the wall.... : )

Thanks for the info. I'd forgotten the poster was in the OZ SCRAPBOOK it's also in an early BUGLE in black and white but it is very dark and blobby.