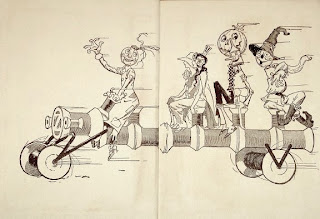 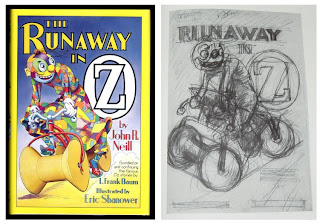 Personally, I'd prefer spool cars to the Scala- wagons that Neill came up with for Ozian transport in his own stories. But Neill didn't forget the idea of spool toys in Oz - his original cover sketch for The Runaway in Oz  features Scraps pedaling away on her spoolicle, which we are told is her favorite mode of transport. This was the inspiration for the handsome cover design by Eric Shanower, who illustrated and also edited the 1995 publication of this final Oz tale by John R. Neill.
Posted by Bill Campbell

Wasn't Scraps's Spoolicle made by Jack Pumpkinhead, according to Runaway?

I don't recall offhand, but it may very well have been - Jack seems to be a handy kind of guy!