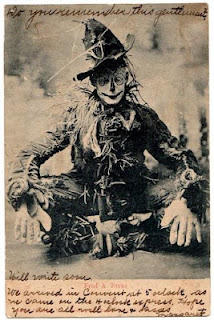 Here's a souvenir postcard of Fred Stone as the Scarecrow in the 1903 Broadway production of The Wizard of Oz. This is one of a series of photo cards that were produced for the show. This example was posted in July 1906, which would have been after the end of Fred Stone's run as the Scarecrow (his final performance was May 19), but in the midst of the postcard craze.

Picture postcards seem to have begun being used in the 1870s, but the golden era was from the 1890s until the first World War. The sudden drop in popularity was due to the fact that the majority of picture cards sold in America at this time were printed in Germany. Consequently, the war effectively ended the supply of finely printed cards. The reverse side of this example states that it was printed in Germany.

It was illegal to write on the address side of a postcard before March, 1907. This meant that messages had to be written over the decorative side, which can create some very difficult to read cards!

Thank you. This is extremely informative. Now I know why so many postcards were "desecrated" (from a collector's view)---they were obeying the law.