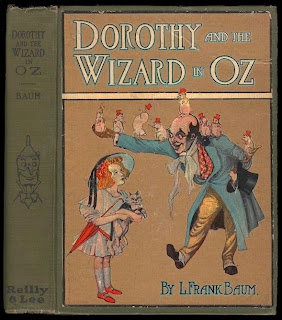 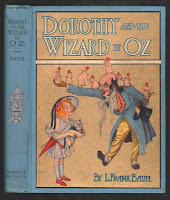 And because pagination issues some editions have illustrations from THE LOST KING OF OZ and THE GNOME KING OF OZ included.

Yes! I think that's usually seen in the copies that are marked Popular Edition on the cover - the color plates were replaced with completely irrelevant illustrations from those later books!

Hi Bill,
Does the verso of the ownership page have any advertisements for the Oz books? I had always pegged this variant as post-1926 because there is another printing listing titles through Hungry Tiger, then copies were issued without ads. But if your copy has no ads, that 1925 inscription would mean that there were ad-less copies issued BEFORE the Hungry Tiger ad was included!

Interesting - no, there are no ads on the verso of the ownership page. Have the copies that you've seen all been bound in the same drab green cloth?

Yes. I've only seen a few personally, including my own copy, but they were all bound in the same cloth. This is a very surprising development. Conventional wisdom has always held that the Baum R&L color reprints were issued with successively updated advertisements in the front matter on a semi-regular basis, generally (though not for every title) Glinda (1920), then Kabaumpo (1922) OR Cowardly Lion (1923), and lastly Hungry Tiger (1926). Subsequent printings were then believed to have no ads. Your copy turns this theory on its head!

Just when you think you have something figured out...!