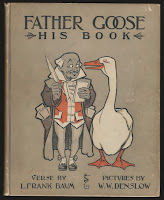 Father Goose, His Book was the first book by L. Frank Baum and W. W. Denslow, and it was a runaway success in 1899. Due to its popularity, the book was kept in publication for many years - first by the original publisher, George M. Hill, then by Bobbs-Merrill, and finally by Donohue & Co. Donohue was a reprint house, who produced cheaper versions of several Baum titles in the mid-teens. The book then dropped out of print and basically disappeared! Strange, in some ways, for such a popular title. 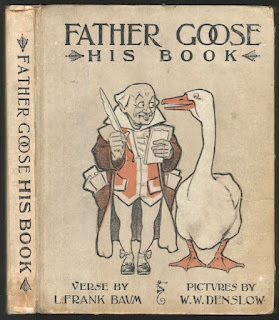 The final Donohue printings are certainly less attractive than the earlier editions of the book. On the right is a copy with a gift inscription from 1919 - "To Billy from Granddaddy". The original Hill printings had a blank spine, but in the Bobbs-Merrill years a title was added - this is still in use on this late Donohue copy. The book itself is slightly smaller than the original printing, and on a heavier, coarser paper, making for a thicker book. 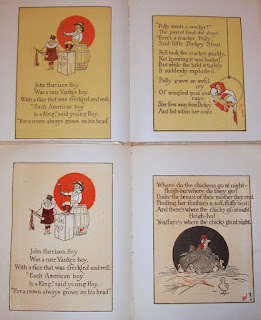 Sadly, the printing of Denslow's whimsical illustrations is not nearly as crisp as in earlier editions - due in part to the cheap paper. On the left, the lower image is from the Donohue book, showing the muting of the background color and a choppy edge on the red circle. This picture also shows how the text had changed - the rather cruel rhyme about Polly the parrot was dropped from the book in its sixth printing.
Posted by Bill Campbell