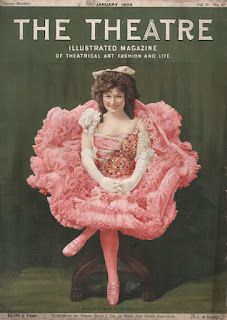 I recently bought a copy of the January 1905 Theatre magazine. The cover features a lovely color image of Lotta Faust in costume as Tryxie Tryfle, in The Wizard of Oz. Lotta was one of several actresses to play the role during the run of the show, and while she didn't create the part, she was probably the best remembered.

She did score a hit with the song Sammy, and came to public attention in this role. In the photo, she is wearing her second act Emerald City fancy dress, also known as the Sammy dress. The photo is tinted pink for the magazine, but according to Mark Even Swartz, in Oz Before the Rainbow, the dress was actually green which would be in keeping with the Emerald City setting.

This was clearly a popular image of Lotta. I have two different postcard versions of this shot, one printed and the other a photo card. The printed card bears the inscription — "Catherine if this play ever comes to Kingston go to it - Mamie" — a fun testimonial to the popularity of the show. 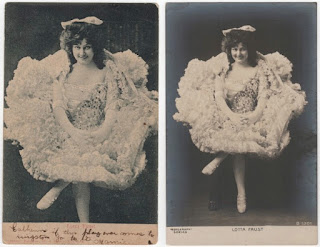 The magazine doesn't feature any articles on Lotta or the show, she was simply a cover girl for this issue. But there is an ad for the Perforated Music Roll Co. that includes Wizard of Oz Selections.

Publicists seem to have been working hard in 1905 - snippets about various actresses in the show turn up in various magazines. The Standard and Vanity Fair ran this shot with a rather ambivalent blurb concerning the performer - 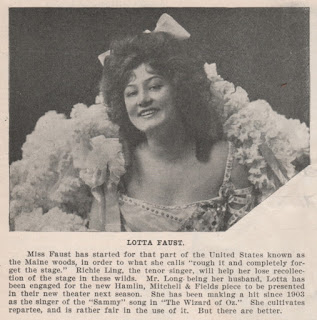 She went on to appear in other shows before her early death in January 1910. According to newspaper accounts of the time, she was hospitalized for an operation to remove an abscess above her heart. The operation was sucessful, but several days later she succumbed to pneumonia. In May of that year, a memorial benefit was held for her mother and a number of performers of the day made appearances.
Posted by Bill Campbell