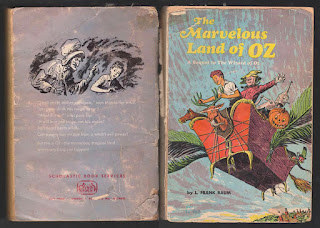 When I was in 3rd grade, I purchased this version of The Marvelous Land of Oz, published by Scholastic Book Services. This was my first introduction to the Oz series beyond The Wizard of Oz, and I was happy to find that there was a sequel to the first story.  I grew very fond of this book, which helps account for it's ratty condition today - oddly enough, it was another several years before I expanded into the rest of the series, as I felt content with just the first two books! 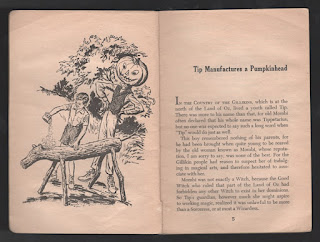 While the covers and frontispiece of this version were drawn by Dom Lupo, the interior contained a handful of John R. Neill's original illustrations. This was my first introduction to Neill’s work, and I was hooked by his imagery of the land and characters. But I was unaware that there was an interesting omission - several of the drawings had originally included the character of Tip, but for this edition they were cropped and edited to remove the boy. Presumably this was because he didn't match the three new illustrations, which showed a more contemporary version of the character. 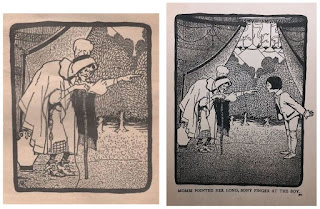 At some point my copy of this book went missing, and I could not find it anywhere. When I was in 4th grade, I discovered a vintage hardback of the book on the classroom bookshelf. This was the personal property of my teacher, Mrs. Smith, who allowed me to look at and read the book during school hours. I was amazed to discover that there was an entire world of illustrations in the book that I had never seen, along with what struck me then as an unusual version of Tip! 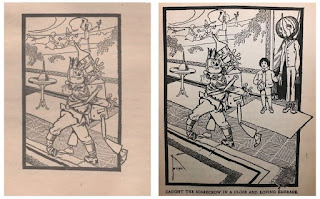 Eventually I found my original copy, in the piles of debris on my closet floor, but knew I needed to find the book with all those other illustrations. This was during the time when white cover Reilly & Lee books were available, as well as the more affordable Rand McNally paperbacks. I happily purchased the paperback - it would be a few more years before I learned the the original book had color plates as well!