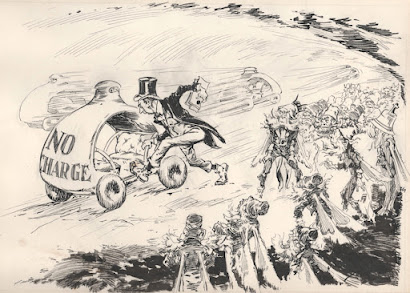 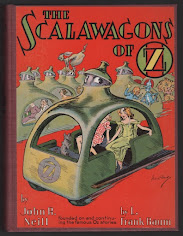 Here's an interesting drawing by John R. Neill; this is an unidentified illustration, probably never used. It shows a crowd of winged men, one wearing a crown and another with a bell on his head, watching a man entering what appears to be an early concept for a Scalawagon. Other similar vehicles zoom by in the background.

The Scalawagons were a form of self-driving car, created by Neill for the 1941 Oz book, The Scalawagons of Oz. In the story they are designed by the Wizard of Oz to be used as free transportation - they can fly as well as roll! Neill's illustrations of the cars are eerily similar to the early concepts for Google's driverless cars.

A handwritten caption at the bottom of this drawing reads "Take me to the City Hall." and "Part 3". On the back of the page are several pencil sketches of the same crowned figure, as well as a variation or two of the man running to the car. 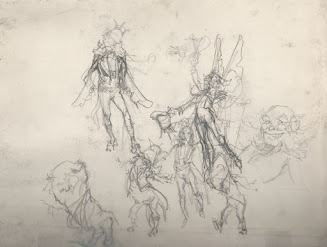 I think this may actually be a drawing intended for an unpublished story by Neill. Over on the John R. Neill Collection website, which features available artwork by the artist, David Maxine shows a drawing titled The Voice of Bong, dated 1939. That example features the same crowned leprechaun king, as well as a bell-headed fairy similar to the one seen in this drawing. It's difficult to imagine what exactly the story might have been. Perhaps it ended up being incorporated into Neill's own Oz books?