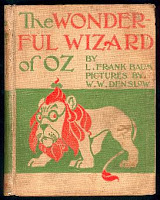 Huzzah! Another Oz blog to keep an eye on!